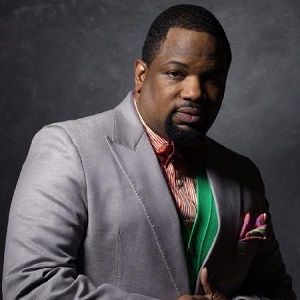 I'm still here, I'm still alive, I'm still blessed, on my way to my destiny, because the favor of God is on my life.

The artist Hezekiah Walker is a divorcee. Walker had tied his knot with his ex-wife, Kyasia Monet Walker in 1992 before his divorce in 2016.

The couple also had been blessed with a daughter named KyAsia Monét Walker.

Currently, he is living a single life with no signs of extra-marital affair and others.

Who is Hezekiah Walker?

Bishop Hezekiah Walker is a recognized gospel pastor and music artist belonging from America. He is also a member of Love Fellowship Tabernacle, a prominent Brooklyn New York megachurch.

The popular music artist was born on December 25, 1962, in Brooklyn, New York City, the United States. His ethnicity is not disclosed.

Since his parents were very religious, he along with his brother and sisters were strictly prohibited from dancing and watching movies. But the artist was very much interested in music since his childhood though he knew about it.

Walker joined a choir at the age of eight when he was a teenager, he started writing songs. When he was only 14, his father died. And he lost his mother as well when he was 21 years old. Her mother died on her way to church.

Since he had no money left, he was about to get thrown out of their apartment. After completing praying, he used to sit down and write the song ‘I’ll Make It’ that brought the turning point in his life.

On talking about his educational background, he joined Long Island University with Sociology as a major subject. He then joined the Hugee Theological Seminary and the New York School of the Bible.

Hezekiah Walker gave a start to his songwriting career at the age of 20. Walker established his first gospel group and named it as the Love Fellowship Crusade Choir during his twenties. He worked for the group as a Pentecostal minister.

Walker recorded a pair of albums in 1987 and 1990 along with his choir before turning to a solo career, recording the song Focus On Glory in 1992. He recorded Live In Toronto after a year, which hit the top of the gospel charts. He then formed another group called the Love Fellowship Tabernacle Church Choir.

Furthermore, the gospel pastor continued to record live albums on the church circuit in 1994. And then in the Live In Atlanta at Morehouse College. The artist has sung lots of music like Family Affair in 1999, The LFT Church Choir in 1998, and Love Is Live! in 2001.

Moreover, he recorded Souled Out in 2008, followed by Azusa: The Next Generation in 2013.

In talking about his net worth and salary, he is assumed to earn lots of salary from his work that has not yet been disclosed. And he has an estimated net worth of $8 million.

Once, Walker was rumored to be a gay after the bitterness of the separation. But he totally rejected this rumor and revealed that it was not so true.

Walker was also rumored that Monet got divorced from her husband as she had been infected by a sexually transmitted disease by him. The rumor too included that Walker didn’t deny to Monet’s consideration that he had a boyfriend and had sex with him. He also forced her and his daughter out of the house to continue his homosexual affair.

Another rumor generated as Walker filed for divorce after he knew that Monet had STD.

Also, read a biography of a popular singer and songwriter Jack McManus.