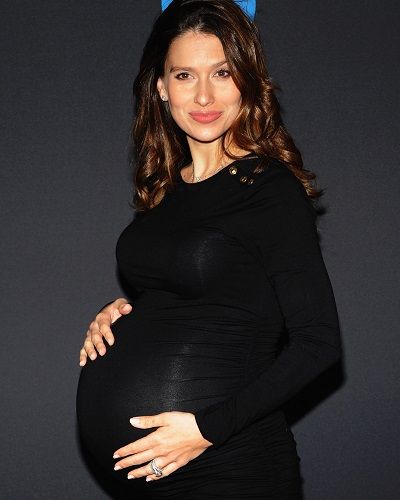 Baldwin finally revealed the happy announcement after previously sharing her heartbreak over two miscarriages suffered in November and April of last year.

She posted the picture of her taking a mirror selfie as she wore a see-through white nightgown and cradles her bump.

She revealed her two miscarriages in 2019 during April and November. When she had the second miscarriage she wrote,

“We will try very hard to give her a little sister another time. … I don’t know what else to say…I’m still in shock and don’t have this all quite clear.”

She announced her pregnancy with a caption,

“Sound up…I’ll let the baby do the talking because I don’t have the words to express how this sound makes us feel,”

“Just got the great news that all is well and all is healthy with this little munchkin. I wanted to share this with you,”

1) Hilaria Baldwin suggested the mother’s out there make a routine. She has four children with her husband. She says that she makes a routine so that she and her kids are in balance.

Baldwin also says that even though she makes a routine but every mother should know when they have to ditch the routine.

2) Kids make a mess many times. But instead of stopping and scolding kids, she says that the parents should allow them as they explore a little bit more.

3) Even though a mother has to give time to her kids but she suggests that moms should take time for themselves. When her kids are sleeping she gives time for online workouts, baths, and games with her husband.

The Spanish-American actress is happily married to Alec Baldwin since 30th June 2012. They walked down the aisle at St. Patrick’s Old Cathedral in New York City after two months of their engagement.

Within the 8 years of marriage, they have been blessed with four children and are expecting another one. Their first child Carmen Gabriela Baldwin was born on 23rd August 2014.

Hilaria Baldwin is a Spanish-American actress, yoga instructor, author, and comedian who is best known for her role in ‘Blind’ in 2017, ‘Nightcap’ in 2016, and ‘Extra’ in 1994. She is also well known for being the second wife of American actor and comedian Alec Baldwin. Read more bio…