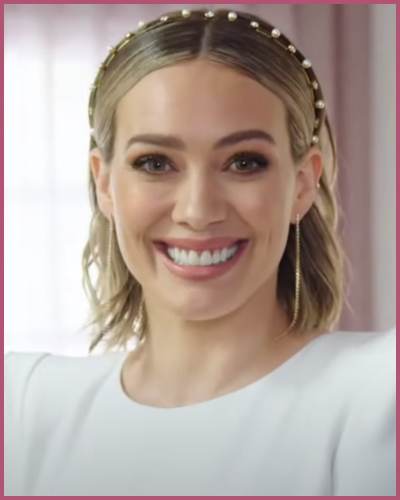 How did Hilary Duff reveal her Eating Disorder?

The Disney Channel alum, 35, revealed that she struggled with a “horrifying” eating disorder for a year when she was 17 as she spoke to Women’s Health Australia. She talked about how she overcame her body dysmorphia.

“Because of my career path, I can’t help but be like, ‘I am on camera and actresses are skinny.’ It was horrifying.”

Explaining how The Casper Meets Wendy star overcame a toxic relationship with her body post-anxiety she continued,

“[I’m] appreciating my health, doing activities that make me feel strong instead of just bettering the outside of my body. Spending time with people that make me feel good and share similar views on health and body positivity and getting enough sleep and balance in my diet.”

Also, Read Selena Gomez Reveals That her Bipolar Disorder Meds Might Not Allow Her to Get Pregnant in Future!

Duff’s personal trainer Dominic Leeder explained that Hilary Duff’s first priority is definitely not her first priority though she keeps hustling to maintain her fitness.

“I don’t feel like she’ll mind me saying this: yes, her fitness and health are hugely important to Hilary. What’s more important to her is her family and work,” he explained. “When she comes home from work, she wants to spend time with her family because she spends very little time with them when she’s hard at work, so every moment counts.”

The How I Met Your Father actress Hilary Duff previously opened up about her relationship with her body as well. She then posed for a nude photo for Women’s Health on May 2o22, commenting,

“I’m proud of my body. I’ve gotten to a place of being peaceful with the changes my body has gone through. I think that at 34 I have just gained a lot of respect for my body.”

She just continued how fascinated she is with being a woman and accepting her body even after her pregnancy. Being a mother is a powerful feeling she developed, after welcoming a daughter Banks Violet, 4, with now-husband Matthew Koma.

“It’s taken me all of the places I need to go. It’s helped me build a beautiful family. I feel like the older I get, the more confident I get in my own skin. And my body’s been many different shapes and sizes and I’m really just fascinated by, one, being a woman. And two, all the changes that your body can go through throughout your lifetime”

Duff who is a mother to 2 with the arrival of 20-month-old Mae James, revealed she learned to accept her body only after being a parent. Duff also shared son Luca Cruz, 10½, with retired NHL ex-husband Mike Comrie.

Who is Hilary Duff?

Hilary Duff is a child artist who found fame as a child with breakout roles in Disney’s Casper Meets Wendy (1998). Her Disney Channel series, Lizzie McGuire ran for two seasons from 2001 to 2004, launching a feature adaptation in 2003.