She tied the knot with her fiancé of almost two years and who is a former NHL player, Sean Avery, at an intimate ceremony in the Hamptons.

She wore a sleek Carolina Herrera column gown – with a black fastening at the neck, adorned with subtle emerald green embellishment – and 14.7 carats of Chopard diamonds. The dresses were low back, encased by two thick black straps, was covered for the ceremony by a long veil. The attendants for the bride wore black.

The pair were joined by friends and family for the outdoor ceremony, which took place at the Parrish Art Museum in upstate New York, near the couple’s Southhampton summer house. 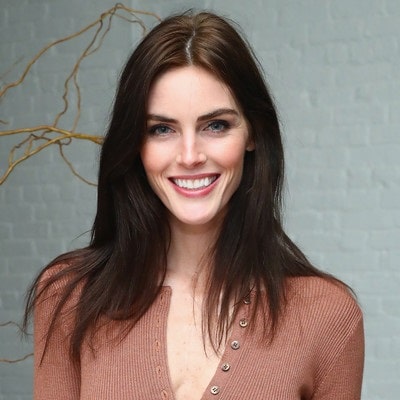 Who is Hilary Rhoda?

Hilary Rhoda is an American model who got international attention after her appearances on the cover of Sports Illustrated Swimsuit Issue in 2009, 2010 and 2011. In addition, she has modeled for the brand, Estée Lauder.

She was born on the 6th of April 1987 in Chevy Chase, Maryland, United States of America. Hilary was born to father Jeffrey Alle Rhoda and mother Marianne Rhoda. She has a brother namely, Spencer Rhoda.

She attended St. Jane de Chantal School in Bethesda, Maryland and graduated from the Academy of the Holy Cross, a Catholic all-girls school in Maryland.

She was first discovered in a ProScout event in Washington, D.C. Later, she started appearing advertisements by Hollister and Abercrombie.

She made her runway debut in Ready to Wear – Spring / Summer 2006 fashion show in which she walked the ramp for Balenciaga, Chanel, Hermes, Jenni Kayne, Lanvin, Rochas, Rodarte, Valentino, Wunderkind, Yves Saint Laurent.

Likewise, she rose to fame for her work with the brand Estée Lauder and her 2009, 2010, and 2011 appearances in the Sports Illustrated Swimsuit Issue.

She has an estimated net worth of around $12 million as of 2022, and she has earned that sum of money from her professional career. Similarly, in 2007, Forbes ranked her 12th in their list of The World’s 15 Top-Earning Supermodels with an estimated earning of $2 million.

Hilary and Mark Sanchez were reported to be dating in the Spring of 2009. Similarly, they posed together in a spread for the June 2009 issue of GQ magazine. Likewise, both of their representatives declined to comment on the romance rumors.

She has a height of 5 ft. 11 inches and weighs 57  kg. In addition, looks marvelous with dark brown hair and blue eyes. Also, she graces her hourglass body measurements of 34-24.5-35.5 inches.