Hilary Swank married Chad Lowe on September 28, 1997. She met Lowe while filming ‘Quiet Days in Hollywood’. The relationship didn’t work out and they finalized their divorce on November 1, 2007.

She began dating her agent John Campisi in 2007 but they broke up later in 2012. Swank announced her engagement with her boyfriend Ruben Torres who is a financial adviser with USB and former tennis player.

They have been dating since 2015. It was later declared that the engagement had ended. Although involved in many relationships, Hilary has not been pregnant till date.

She told in one of her interviews that she will have children “All in good time”. She is currently single and no new information regarding her current relationship has emerged. 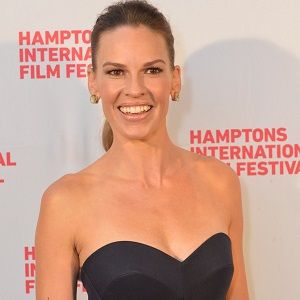 It's how you look at beauty. Is it only an outward appearance with hair and makeup and a hot body, or is it something deeper than that

I love to travel. I'm a curious person

I had to fight my whole life to break out of my circumstances. That's just part of my makeup.

Who is Hilary Swank?

Hilary Swank is a two-time Academy Awards winner American actress and producer. She also received a star on the Hollywood Walk of Fame in 2007. She is mostly known for her role in the ‘Karate Kid’ franchise and ‘Million Dollar Baby’.

Hilary was born on 30 July 1974, in Lincoln, Nebraska. Her nationality is American and ethnicity is mixed(English and German).

She is the second child of Judy Kay(mother) who was a secretary and a dancer and Michael Swank(father) who was a Chief Master Sergeant and later a traveling salesman.

Hilary Swank moved to the trailer park in Bellingham, Washington when she was six.
Her role in acting came when she was 9 years old when she started in ‘The Jungle Book’.

The relationship of her parents did not work out and they separated when Hilary was 15. Her mother was always supportive of her in every step of her life. Her mom moved with her to Los Angeles for her career.

Financially at rock-bottom, renting an apartment was beyond option for them. They had to live in their car until her mother was able to rent an apartment.

She was enrolled in Happy Valley Elementary, Fairhaven Middle, then in Sehome High School until the age of 16. She competed in the Junior Olympics and Washington State Championships in swimming.

She attended South Pasadena High School in California but eventually dropped out due to her ADHD and because of her lack of interest.

She said that since her childhood, she was able to connect with the characters of the books and the movies, which as she believes, is what made her drawn to the show business initially.

Hilary made her debut through a small role in ‘Buffy The Vampire slayer’. Her first lead role was in the fourth movie of ‘The Karate Kid’ franchise ‘The Next Karate Kid’. Later she appeared in ‘Kounterfeit’ along with the British actor Bruce Payne. Her dedication to play the role in ‘Boys Don’t Cry’ has been an inspiration for other actors and directors in the show business.

Her role in the movie was critically acclaimed. Her performance was termed as the best female performance of that year by many critics. She won the Golden Globes and Oscar for best actress for the same movie. Her performance in 2004’s movie ‘Million Dollar Baby’ earned her another Oscar. Since gaining two Academy Awards, she has had a reputable name in the Hollywood Business due to her versatility in acting.

She has won 57 wins and has been nominated 40 times for various categories. She has won Bambi Awards, BSFC Awards, Critics Choice awards, CFCA Awards, DVDX Awards and other multiple awards. These nominations in various awards for different categories has made her one of the successful actresses in the show business.

Hilary Swank was a part of a controversy regarding Human Rights. She attracted controversy when she attended an event in Chechnya’s capital Grozny. Ramzan Kadyrov, the president of Chechnya had been accused of human rights violation.

She later apologized and said she “deeply regrets” taking part in the event. She came to the media attention when she was rumored to be the next Bond girl in the James Bond movie.

She has a good height of 5 feet 6 inches with body weight 55kg. Her hair color is Golden brown and her eye color is light brown. Her bra size is 32B, her shoe size is 9 US and her dress size is 2US. She has a well-shaped body with  34-24-35 inches.

Also know more about the early life, career, net worth, relationships, and controversies of other actress and producer including Sandra Bullock, Marcheline Bertrand, Yolanda Adams, Amanda Bynes, and Alexandra Canosa.