Hillary Scott is an American singer and songwriter. She is the co-lead singer of Lady A, previously known as Lady Antebellum. 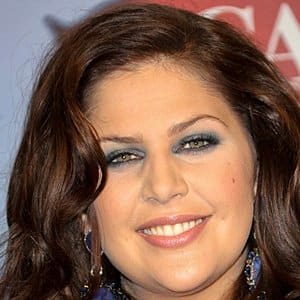 I'm not a tanning bed person at all, but I'll get a spray tan.

We want to stay on this tour bus together as long as we possibly can. I'm sure a lot of bands are like, 'I need my own space.' But we don't. I want to be with these guys forever.

The three of us just try put our heads down and stay creative. The awards truly are just cake. It's one of those things that you never expect, but getting the head nod from either the fans or your peers, that's the ultimate compliment.

Hillary Scott dated American football quarterback, Aaron Rodgers in 2010. Currently, she is a married woman. She is married to Nashville-based drummer, Chris Tyrrell. The pair began dating in July 2010.

Eventually, Chris proposed to Hillary on July 2, 2011. Their wedding was held on January 7, 2012. The couple has a daughter Eisele Kaye Tyrrell and a son Louis Christopher.

Who is Hillary Scott?

She has released several albums to date including ‘Lady Antebellum’ and ‘Heart Break’.

Scott was born in Nashville, Tennessee on April 1, 1986, to parents Linda Davis and Lang Scott. Her mother is a country music artist and her father is a musician and entrepreneur.

Additionally, she has a younger sister named Rylee Jean. She became interested in the world of music in her childhood years. She is of American nationality. Furthermore, she belongs to a mixed ethnic background of English, Scottish, and Welsh.

Talking about her education, Scott attended elementary school and high school at Donelson Christian Academy. She graduated from there in 2004. Additionally, later, she attended Middle Tennessee State University.

Scott initially worked with singer-songwriter Victoria Shaw during her time at the Middle Tennessee State University. Soon, she met her future bandmates Charles Kelley and Dave Haywood. They wrote their first song titled ‘All We’d Ever Need’ and they eventually signed a record deal with Capitol Nashville in 2007.

Since the release of the first album, Scott and Lady Antebellum have released several other studio albums including ‘Need You Now, ‘Own the Night’, ‘Golden’, ‘747’, and ‘Heart Break’. In addition, they also released a Christmas album titled ‘On This Winter’s Night’ on October 22, 2012.

Furthermore, she has provided soundtracks to several movies and television series including ‘The Clash’, ‘Zero Dark Thirty, and ‘Glee’. Scott also appeared as a mentor for ‘Team Adam’ on season 4 of ‘The Voice’. Additionally, she presented Gospel Hour for BBC Radio 2 Country in 2016.

Scott and Lady Antebellum have garnered nine Grammy Awards, seven ACM Awards, one Billboard Music Award, and six CMA Awards. Additionally, Scott has been named SESAC songwriter of the year for three years in 2008, 2010, and 2011.

This singer has not revealed her current salary. However, she has an estimated net worth of around $25 million at present.

Scott recently made the news after the birth of her twin daughters. Previously, it was reported that she had suffered a miscarriage in 2015. At present, there are no rumors concerning Scott and her career.

Talking about her body measurement, Hillary Scott has a height of 5 feet 9 inches (1.75 m). Additionally, she weighs around 76 kg or 167½ pounds.

In addition, she has over 601k followers on Instagram. Similarly, her Facebook page has more than 336k followers.

To know more about Nicole Kang, Josie Lawrence, and Jennifer Freeman, please click on the link.