Talking about his relationship details, Hiroyuki Sanada is presently single and he is not dating anyone at the moment. He seems to be focused on his career and professional life.

Previously, the star was married to a Japanese actress, Satomi Tezuka. Tezuka is widely known for her work in Isola: Multiple Personality Girl, Revolver, and A-homansu. They tied the knot in 1990 and were blessed with two sons.

However, the ex-couple parted in July 1997 and their sons are in custody with his ex-wife. 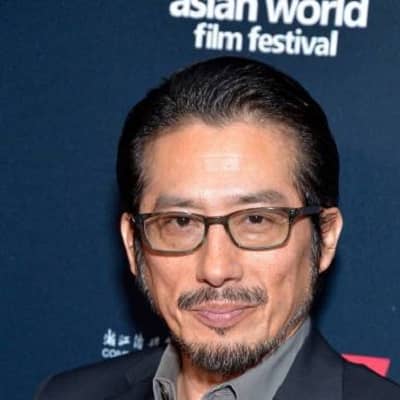 Who is Hiroyuki Sanada?

Hiroyuki Sanada is a well-recognized Japanese actor and television personality. Sanada is widely famed for his role as Tasogare Seibei in The Twilight Samurai, Ujio in The Last Samurai.

Moreover, he has also appeared in movies like Speed Racer, The Wolverine, 47 Ronin, Life, and Avengers: Endgame.

Hiroyuki Sanada was born on 12 October 1960. At present, his age is 61 years old. Likewise, his birthplace is Shinagawa, Tokyo, Japan.

Not much is known about his father and mother’s details, Hiroyuki has been secretive towards her family details. Moreover, he has not mentioned his sibling’s information in the public.

Talking about his nationality, Sanada holds a Japanese identity whereas his ethnicity is Asian.

Regarding education, the actor joined the Himawari Theatre Group at the age of five. Later, he completed his graduation from Nihon University with a Bachelor of Arts.

Hiroyuki started his film career when he co-starred in Royal Warriors against Michelle Yeoh. Later, he worked in Danny Boyle’s Sunshine. From 1980 to 1991, he released a series of albums and singles in Japan as a singer; several of these were tied to films. In 1977, he guest-starred in the drama, ‘J.A.K.Q Dengekitai’.

Moreover, Sanada has featured in series like The Yagyu Conspiracy, Abarenbo Shogun, Shogun’s Samurai, Message from Space, and so on. The actor then worked in the 1983 movie, Legend of the Eight Samurai. Some of his appearances in movies are Tugumi, Nemuranai Machi: Shinjuku Sam, Crest of Betrayal, East Meets West, and so on.

Recently, the star worked in the drama series, Lost in 2010. He then appeared in the series, Revenge. Sanada has also appeared in The Wolverine, The Railway Man in 2013. He was also announced as part of the cast of the FX limited series Shogun, adapted from the James Clavell novel in 2021.

A famed Japanese star, Sanada has earned a handsome amount of money from his profession. He has been active in his profession from the year 1965 till the present.

It is reported that Hiroyuki Sanada has an estimated net worth of $10 million as of 2022.

Hiroyuki has never been part of any controversial matter or rumors till now. The actor has been preoccupied with his professional and personal life.

It seems that Sanada prefers enjoying his personal life and does not want to merge it with his professional life.

61 years old actor, Hiroyuki has handsome looks and an admirable personality. He stands at a height of 5feet 6inches. Also, he has a balanced bodyweight of 63 kg.

Furthermore, Sanada has dark brown eyes whereas his hair is black. His body measurement is 44-32-16 inches(chest-waist-hip) respectively.

Regarding his social media presence, Hiroyuki Sanada is an active personality on social media. Hiroyuki has more than 7k followers on his official Instagram account @sanadasan_fans.

Moreover, Sanada is also available on Facebook with nearly 6k fans and supporters.