Hoda Kotb is a Co-anchor of the Today Show. She is also a journalist and television personality. Previously, she was married and is a mother of Haley Joy and Hope Catherine.

Hoda Kotb is currently engaged to her boyfriend from six-years, Joel Schiffman. Joel is a New York financier.

He proposed her and they engaged on 25th November 2019.

Joel and Hoda started dating since 2013.

On Feb 21, 2017, Kotb announced on the Today Show that she had adopted a baby girl named Haley Joy Kotb.

Previously, she was married to a  former University of New Orleans tennis coach Burzis Kanga on the 3rd of December 2005, but after two years they got divorced and their divorce was finalized on the 14th of February 2007. 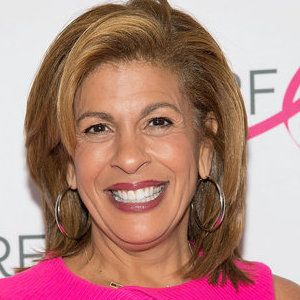 I love music. For me, music is morning coffee. It's mood medicine. It's pure magic. A good song is like a good meal-I just want to inhale it and then share a bite with someone else.

It's made me realize that imperfect is perfectly comfortable to me. Whether it's a city or my apartment, I feel most at home when things are somewhat flawed.

I like the pace of my world. It's busy, but for me, the less I do the lazier I get.

Who is Hoda Kotb?

Hoda Kotb is an Emmy Award-winning Journalist and television personality. She is also an actress and TV host.

She is famous as the co-host of NBC’s Today Show.

Hoda was born to Egyptian parents, A.K. Kotb and Sameha Kotb on 9 August 1964, in Norman, Oklahoma, the U.S. Her nationality is American and her ethnicity is Egyptian.

Her father, A.K. Kotb is a former fossil energy specialist and her mother, Sameha served for the Library of Congress.

She was raised in Egypt for a year, and later her family migrated to Nigeria.

She graduated from Fort Hunt High School in 1982 where she was elected Homecoming Queen and selected to speak at her graduating class.

In the year 1986, she graduated with a Bachelor of Arts degree in broadcast journalism.

Hoda started her profession in 1964 as a news assistant.

In 1998, been a correspondent for Dateline NBC.

On January 2, 2018, Kotb appeared for the first time in the fourth hour of the Today Show with co-host Savannah Guthrie.

She also appeared in Martina McBride’s music video through which she was able to earn more fame among people.

Her memoir, Hoda: How I Survived War Zones, Bad Hair, Cancer, and Kathie Lee was published in 2010.

She wrote Ten Years Later published in 2013 and in 2016, Where They Belong: The Best Decisions That People Almost Never Made was published.