Holiday Reinhorn is a Co-Founder of an educational initiative Lide Foundation. Holiday is married and a mother of one. 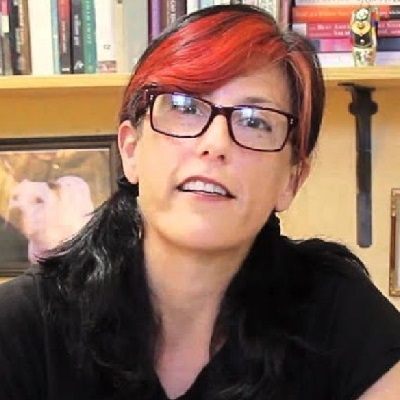 Holiday Reinhorn is married to her college sweetheart, Rainn Wilson. They first met each other at the University of Washington. After university, they moved to New York to pursue their acting career.

The longterm lover finally took the big step to get married on the 30th of June 1995. The wedding took place on the Kalama River near St.Heles in Washington following the Baha’i ceremony.

In 2004, they welcomed their son, Walter McKenzie Wilson.

Who is Holiday Reinhorn?

American Holiday Reinhorn is a fiction writer and Humanitarian. She is renowned as the author of the book, Big cats.

She is also the founder of the Lide Foundation.

Holiday Reinhorn was born on the 12th of March 1964 in Portland, Oregon. She is of British-Irish ethnicity.

Her mother, Mary Putka is a city council member of Kalama. Before that, she used to be a schoolteacher. Also, his father is a dentist by profession.

After graduation, he started his service at Kuma Station in Japan. Due to that, Reinhorn lived all over Asia that includes HongKong and Thailand.

She has a younger brother born in 1970. The following year, her family relocated to the United States.

Talking about the educational background, she graduated joined the University of Washington with Carl Djerassi Fiction Fellowship.

Holiday Reinhorn moved to New York to pursue the acting career. At the time, she also performed in the theater plays with her future husband, Rainn.

Moving forwards, in 2005, she launched her book, Big Cats under the publication house, Free Press Publishers. Besides that, she has contributed many stories to the magazine like Tin House, Ploughshares, Gulf Coast, and many more.

In 2002, she also adapted his short story on the screen with the name, Last Seen. Last, she released the short drama, PUSH in 2017.

Apart from being a writer, she is active in various charity events. She is the founder of the Lide Foundation. The fund basically in the education sector of Haiti and empowers the girls. Also, the fund helps them in the school and job training too.

As of 2020, she has an estimated net worth of $300 thousand. Her earnings as an author are in the range of $24k to 103k. Besides that, she also makes through the royalties of her books too.

Talking about the net worth, her husband, Rainn has an estimated net worth of $14 million. His net worth is attributed to his career as an actor, director, and comedian.

Till the date, she has managed to stay far from any type of controversy that created a buzz in the media. Also, there are no rumors related to him.

Holiday Reinhorn has black eyes with black hair. However, she prefers to color her hair red. She stands at a height of 5 feet 6 inches and has a decent weight.