Holland Virginia Taylor is an actress and famous playwright.

Holland Taylor 78 years old, is unmarried as prefers women over men. She chose to date men until 2004 when she met actress Cherry Jones.

Holland and Cherry remained in the relationship for five years until 2009. She started dating actress Sarah Paulson in 2015. They continue to be in a relationship to this day. 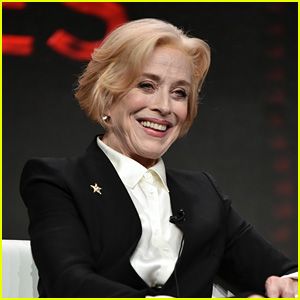 I notice that most of the men who tease me about my hair, don't have any

I just never was the marrying kind

Who is Holland Taylor?

Holland Virginia Taylor is an actress and famous playwright from Philadelphia, Pennsylvania. Her prime casts include Judge Roberta Kittleson in The Practice (1998-2003), which won her the Primetime Emmy Awards in 1999.

In 2013, she was nominated for writing and starring in a solo play called Ann. The play was based on the life and works of politician Ann Richards.

Holland Taylor was born on January 14, 1943, in Philadephia, Pennsylvania. Her father Virginia (née Davis), was a Painter and her mother C. Tracy Taylor worked as an attorney.

She has two sisters Patricia and Pamela and is the youngest daughter of her family.

Holland Taylor studied at Westtown School located in West Chester, Pennsylvania. After completing her high school at Westtown she attended Bennington College and graduated in 1964 holding her degree in Drama.

Holland Taylor began her career in the showbiz from the theatre. In the time interval of three decades from the ’60s to the ’80s Holland appeared in numerous plays and dramas. Her major theatric performance includes Simon Gray’s Butley, A. R. Gurney’s The Cocktail Hour, and Breakfast With Les and Bess among others.

Holland broadened her career by appearing on TV shows from the ’80s and continues to amaze audiences with her performance skills these days. The Edge of the Night, Bosom Buddies, Me and Mom, Harry, Going Places, The Powers that Be, The Practice, and Two and a Half Men are a few examples from her career in TV shows.

The one-woman play called Ann: An Affectionate Portrait of Ann Richards (originally titled Money, Marbles, and Chalk) that Taylor wrote and starred in was one of the milestones in the history of American Plays. It began playing in theatres in May 2010 and toured different states of the USA until 2013!

Holland Taylor has been awarded numerous awards and nominations throughout her career as an actress and playwright. She won the Emmy Awards for Outstanding Supporting Actress- Drama Series in 1999 and has been nominated for the same category more than half a dozen times.

She also won the Tony Awards for Best Actress in a Play in 2013 for Ann: An Affectionate Portrait of Ann Richards.

Holland Taylor: Salary and Net Worth

Holland Taylor’s salary details are unknown. Her net worth is eighteen million dollars.

Holland Taylor’s sexuality remained a matter of controversy until she finally came out of the box in an interview with WNYC.org. She admitted that she preferred women over men thus ending the disputes that were raised about her sexuality.

Also get to know more about the birth facts, education, career, net worth, rumors, height, and social media of different personalities like Sutton Foster, Marlo Thomas, and Jon Cryer.

Tags : Actress Playwright Two and a Half Men