Holly Hamilton is a BBC journalist. She is married and a mother of one. 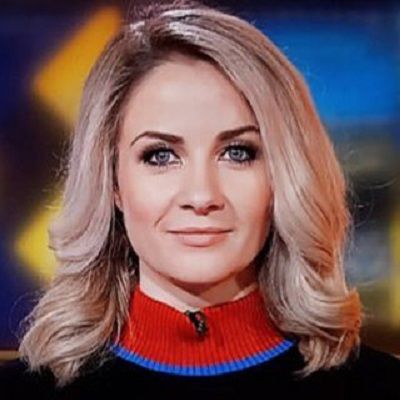 Holly Hamilton got united with the man of her dreams when she was working at Cool FM Radio before joining BBC Breakfast. His name is Connor Phillips. At the time the two met, he worked as a DJ on the radio.

After a couple of romantic dates, Holly and Connor officially announced that they were in a serious relationship. The pair moved to England to pursue their career in the journalism and reporting field. They grew closer and closer to each other with time.

The couple was so in love that they decided to take their relationship to the next level and got married on 5 June 2018. They have a son Fionn Phillips born on 21st January 2021.

Who is Holly Hamilton?

Holly Hamilton is an Irish Journalist who works at BBC. She works as an anchor on the Victoria Derbyshire on BBC Two, the BBC News channel, and BBC Breakfast on BBC One.

Holly Hamilton was born on the 10th of December 1986, in Northern Ireland. Currently, she is 35 years of age. Hamilton was very hard working from a very young age, carrying an aim to pursue her dreams of being a journalist.

However, there are no details about her parents and siblings yet. Similarly, her ethnicity is Caucasian. Her nationality is Irish.

Holly didn’t start her career until she got her master’s degree from Dundee. First, she began working at Bauer Media in Dundee in July 2008. There, Holly worked as a broadcast journalist. Similarly, in November 2010, Hamilton left her job at Bauer and took the role of a news reporter at SVT Group plc, where she reported on daily incidents in Scotland.

During her time fame in SVT group plc, she also edited and produced the network’s nightly program, Scotland Tonight. However, she resigned from her role at SVT in January 2013 and returned to Bauer Media. Holy returned there as a host and editor, and also presented daily news for Cool FM and Downtown radio as a radio jockey.

Similarly, her biggest breakthrough came in June 2014, as she migrated to England to work for BBC. The journalist worked with BBC News as a news reporter for their morning news program, BBC Breakfast, and sports program, BBC Sport. After that, she received worldwide recognization for her work with the BBC. Currently, she is still working with BBC News. She is researching topics on her own and presenting them at their best to her audience worldwide.

So far, Holly has not won any awards or received any nominations for her work.

Holly has not disclosed her net worth or annual income. However, as per some notable online sources, the average salary for a news anchor is around $83,300. And, this can range from a minimum of $14,000 to a maximum of $875,000. So, she probably earns a salary in that region. Her source of income is Journalism.

There are no rumors or controversies surrounding Holly Hamilton so far.

Holly Hamilton has not revealed her height, weight, or any other body measurements. However, according to some online sources, she has a height of around 5 feet 8 inches. Furthermore, she has blonde hair and green colored eyes.

You may also like to read about the age, career, bio, net worth, body measurements, etc of Joe O’Brien (Journalist), Anne Thompson (Journalist), and Lucy Aharish.