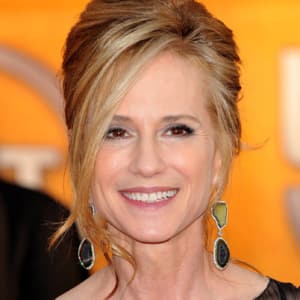 “Acting, for me, is the last vestige of doing something that I would like to feel really naive about.”

Holly Hunter married to cinematographer Janusz Kamiński, in 1995. But, they could not hold the relationship and they got divorced in 2001.

Then, she had an affair with British actor Gordon MacDonald since 2001. They first met in San Jose Repertory Theatre’s production of playwright Marina Carr’s ‘By the Bog of Cats’. They have welcomed twin boys, Claude, and Press in January 2006.

Who is Holly Hunter?

Holly Hunter is an American actress and producer. She has won the Academy Award, BAFTA Award, Golden Globe Award, Cannes Film Festival Award for Best Actress for her role as Ada McGrath.

She was born in Conyers, Georgia, USA on March 20, 1958. Her father’s name is Charles Edwin Hunter and her mother’s name is Opal Marguerite. Her father was a farmer and sporting-goods manufacturer’s representative while her mother was a housewife. There is no information about his siblings. She holds American citizenship and her ethnicity is a mix of English, Scottish and Wales.

She completed her degree in drama from Carnegie Mellon University, Pittsburgh in 1980.

She debuted from the horror movie ‘The Burning’ in 1981 and she moved to L.A. in 1982. She appeared in TV movies and made her appeared in a supporting role in ‘Swing Shift’. Holly collaborated with the writing-directing-producing team of Ethan Coen and Joel Coen, in Blood Simple in 1984. She became a star after her role in the Coen’s ‘Raising Arizona’, and in ‘Broadcast News’.

Holly also made her appearance in ‘Miss Firecracker’, ‘Always’, ‘Roe v. Wade’, etc. She was nominated for two Academy Awards for her work in ‘Once Around’. She was featured in the comedy-drama ‘Home for the Holidays’ and in the thriller ‘Copycat’, both in 1995. Holly played in ‘Crash’, ‘A Life Less Ordinary’, ‘Living Out Loud’, ‘Woman Wanted’, and many more.

She was featured as the supporting role in ‘O Brother, Where Art Thou?’ and in television movie ‘Harlan Country War’. She played alongside Brittany Murphy in the romantic satire ‘Little Black Book’ in 2004 and she voiced for Helen Parr in the animated superhero film, ‘The Incredibles’. Holly also gave the voice for Elastigirl in the Disney Infinity video game series and reprised her role in ‘Incredibles 2’ in 2018.

Holly Hunter: Net Worth and Salary

It is estimated that she has a net worth of around $14 million and her main source of income is from her professional career.

She was rumored that she did plastic surgery taking botox injection of a facelift. But, it has not been confirmed yet.

She has a  height of 5 ft. 2 inches and she weighs 55 kg. Holly has a body measurement of 32-24-32 inches respectively. She has black colored hair and dark brown eyes. She wears shoes of size 7(US) and dress of size 6(US).