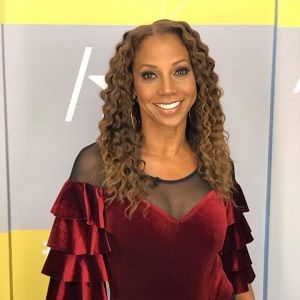 Being a typical teenager isn't easy. When you have autism, it can be extra difficult. We need more public awareness about these hurdles as well as compassion towards these young people

I loved football even before I married a quarterback

it's not for every woman, but I like it

As a mom, you worry about protecting your kid. But there are extra added layers of fears when you're talking about a kid with autism or who has some special needs issue.

The 53-year-old American actress, Holly is a married woman. She tied the knot with Rodney Peete on June 10, 1995. Together, they also have four children twins Ryan and Rodney Jr., Robinson and Roman. Since their marriage, the couple has maintained a perfect relationship between them.

It has been more than two decades the couple has been in married life. Apart from her husband, she has been never spotted with any man in the public and media.

Prior to her marriage, she dated Jason Patric. Moreover, her name was also linked up with veteran actor Johnny Depp. Currently, Holly and Rodney are enjoying their married life and living elegantly.

Who is Holly Robinson Peete?

Holly Robinson Peete is an actress and singer from America. She is famous for her role as Judy Hoffs on the Fox TV police drama 21 Jump Street.

Furthermore, she also appeared in several TV series such as For Your Love, The Celebrity Apprentice, Chicago PD, and few others. Additionally, Holly was one of the original co-hosts of the CBS daytime talk show The Talk.

Holly was born on September 18, 1964, in Philadelphia, Pennsylvania, USA. Talking about her nationality, she is American and her ethnicity is African-American.

She is the daughter of Matt Robinson and Dolores Robinson. From the beginning of her childhood, she had a keen interest in acting and also began to learn from a very early age.

Moving towards her education, Holly attended Santa Monica High School in Santa Monica, California. Later, she completed her graduation from Sarah Lawrence College with a degree in psychology and French.

Holly began her acting career as a little girl Sally in 1969 TV series Sesame Street. In 1979, she made her major role as Genettia Lang in Dummy.

She came into the limelight after starring as Officer Judy Hoffs in the hit Fox TV police drama 21 Jump Street. Moreover, she also appeared in several televisions series such as The Jacksons: An American Dream, Hangin’ with Mr. Cooper, Killers in the House, After All, and a few more.

On October 18, 2010, Holly started co-hosting the CBS daytime talk show, The Talk. Besides this, she also appeared in a couple of films such as Howard the Duck, Matter of Life and Dating, Speed-Dating, and Instant Mom.

Recently, the veteran actress featured in TV series such as Chicago PD, For Peete’s Sake, and Meet The Peetes. In addition, Holly also took part in The Celebrity Apprentice 3. She has also hosted the 42nd NAACP Image Awards along with Wayne Brady.

Being a famous actress, she earns a decent amount of money from her profession. Currently, she has a net worth of $4 million.

So far, she has not won any awards in her career. Although, she got six Image Award nominations as well as a Kid’s Choice Award and Blimp Award.

As of now, there are no rumors regarding her personal and professional life. However, she stole the headline when she got fired from The Talk. She also stated they are getting a new face as a host. Besides this, she has never faced any controversy in her career to date.

Holly has a height of 5 ft 4 inches and her weight is unknown. Furthermore, she has a pair of brown eyes and brown hair. Apart from that, there is not any information regarding her other body measurements.