Hope Solo is an American former soccer goalkeeper. Likely, she was a goalkeeper for the United States women's national soccer team from 2000 to 2016 and is a World Cup champion and two-time Olympic gold medalist.

Hope Solo officially started dating former NFL star, Jerramy Stevens in August 2012. Their love story to date stands out as one of the most bizarre ones in the history of sports.

In November 2012, cops were called to their houses for an alleged domestic violence incident. The call was made by her brother. They had got into an argument over where to live after getting married.

Jerramy was arrested but was released on the following day. And, after his release, they got married in a small and intimate wedding ceremony.

This couple is now blessed with two children (twins). They are Lozen Orianna Judith Stevens and Vittorio Genghis Stevens and were born on March 4, 2020. 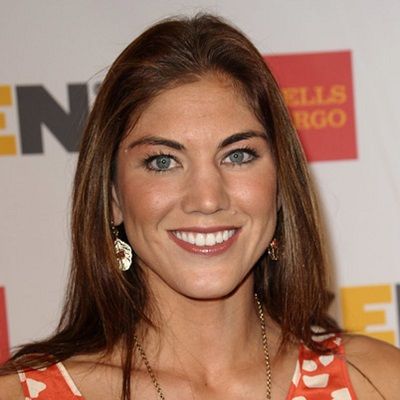 I think it's my personality to overcome things, learn from them and become stronger, both personally and professionally. To be honest, I welcome those hardships.

All my life, since the time I was little, has been a long distraction. At least that is the way some people want to perceive it, but for me, it's given me a lot of strength.

Who is Hope Solo?

Hope Solo is an American former soccer goalkeeper. Likely, she was a goalkeeper for the United States women’s national soccer team from 2000 to 2016 and is a World Cup champion and two-time Olympic gold medalist.

She is also famous as the top female goalkeeper in the world.

Hope Solo was born on July 30, 1981, in Richland, Washington, the United States. Her birth name is Hope Amelia Solo.

Hope’s father’s name is Jeffrey Solo, who was an Italian-American Vietnam War veteran and her mother’s name is Judy Lynn. Her parents divorced when she was six years old.

Then, after graduating from school, Solo went to study speech communications at the ‘University of Washington in 1999.

Talking about her profession, Solo was drafted by the ‘Women’s United Soccer Association team ‘Philadelphia Charge’ in 2003.

Likewise, she took the field in eight matches, securing her first professional shutout against the ‘Atlantic Beat’.

After WUSA suspended operations in 2003, she traveled to Europe and played for the Swedish club ‘Kopparbergs/Göteborg’ in 2004, and the French club ‘Olympique Lyonnais Féminin’ in 2005.

She ended the season conceding fourteen goals in seventeen matches.

She received a $2,500 fine for her remarks against the match officials and the league following her team’s loss to ‘Washington Freedom.’

Moreover, for the 2012 club season, she played for ‘Seattle Sounders Women’. Basically, Solo joined ‘Seattle Reigns FC’ in 2013 for the inaugural season of the ‘National Women’s Soccer League’.

In 2013, she also participated in Dancing with the Stars, season 13 and her partner was Maksim Chmerkovskiy.

Then, she took ‘personal leave’ from the club in 2016, after appearing in 54 matches spanning 3 seasons.

Besides that, Solo published her autobiography, ‘Solo: A Memoir of Hope’, which was co-authored with sports journalist Ann Killion, on August 14, 2012, through ‘HarperCollins Publishers.

It opened at #3 spot on ‘The New York Times Best Seller list in the hardcover non-fiction category.

At the time of the suspension, she had appeared in 202 international matches with a record of 102 shutouts.

Similarly, she was also the winner of the Bronze Ball in 2011.

Hope Solo has an estimated net worth of around $4 million as of 2022 and she has earned that sum of money from her professional career.

Hope Solo has a lucrative endorsement deal with sportswear giants, like Nike.

She was arrested during the time of the two misdemeanor counts and was made guilty of the assault in the 4th degree.

Another rumor was Solo was also arrested during the year 2014, January 21.