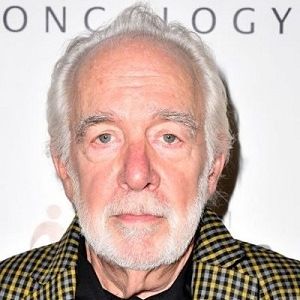 We're not doing the show that I was led to believe I'd do, and it's difficult for me to get off that. I don't want to air dirty laundry in public, but I do feel that the educational arena is one that offers a variety of story ideas as a means of investigating our lives -what we mean to one another and what's important. We could do all that with considerable humor, not with jokes, but with genuine humor that comes out of character and situations.

Howard Hesseman is a married man. He was in a marital relationship with actress Catherine Maison from May 3, 1965, to 1974. However, this was only his second marriage, his first wedlock stays a mystery but the matrimonial ended in 1961.

The story still does not end here as the actor remained a close friend and one-time lover of singer-songwriter Janis Joplin in the late 60s.

Moreover, Howard is living a happy married life with his spouse Caroline Ducrocq. They dated sometime at the beginning of 1989 for six months before their nuptials. Finally, the couple tied the knot on July 22, 1989, in a private ceremony.

Although married for almost 30 years now, it is very surprising to know that the duo does not share any kids. It seems that they prefer to enjoy each other’s company so much that they like to live childlessly.

Who is Howard Hesseman?

Howard is an American actor. He is well-known played the role of WKRP in Cincinnati as Dr. Johnny Fever, Captain Pete Lassard in Police Academy 2: Their First Assignment, Sam Royer on One Day at a Time and schoolteacher Charlie Moore on Head of the Class.

Howard Hesseman was born in Lebanon, Oregon, the United States on February 27, 1940, and is currently 79 years old. His father’s name is George Henry Hesseman and his mother’s name is Edna Forster.

Howard’s parents divorced when he was five, and he was raised by his mother and stepfather, a police officer.

There is no information about his siblings. Howard holds American citizenship, but his ethnicity is unknown. His birth sign is Pisces.

He graduated from Silverton High School in 1958. He went to the University of Oregon and was later a founding member of the San Francisco-based improvisational comedy troupe The Committee with fellow actor David Ogden Stiers.

Talking about his professional, Howard Hesseman made some television appearances, including one episode of Dragnet in 1968 in which he portrayed a hippie named Jesse Chaplin, the editor of an underground newspaper.

Besides this, Howard became a playwright in the sixth season of the show, writing a play about the characters in the group. In 1969, he appeared uncredited with The Committee (though at the time using the name Don Sturdy) in several sketches on The Dick Cavett Show, and appeared in one sketch with guest Janis Joplin.

During 1986, he was also in the Disney cult classic Flight of the Navigator. He reprised the role in nine episodes of The New WKRP in Cincinnati, and also directed several episodes of the 1991-93 series revival. In the year 1994, Hesseman introduced lost footage of Joplin in a documentary on Woodstock.

He made two appearances on Saturday Night Live, one in which he paid tribute to, and told jokes about, the recently deceased John Belushi and the other in which he mooned President Ronald Reagan.

He also encouraged the viewing audience to moon the picture and send pictures in to NBC.  Likewise, in 2001, Hesseman had a role in three episodes of That ’70s Show.

Moreover, in February 2011, he also had a guest role as Dr. Elliot D. Aden in the CSI: Crime Scene Investigation episode titled “Turn On, Tune In, Drop Dead” from season 11 (episode 16).

This senior actor has an estimated net worth of around $5 million earned from his professional career.

He was nominated for Outstanding Supporting Actor in a Comedy or Variety or Music Series for WKRP in Cincinnati (1978) at Primetime Emmy Awards.

Likewise, he was nominated for Teacher of the Year for Head of the Class (1986) at TV Land Award. But he has not won any of the awards yet.

Hesseman is successful in maintaining her career. Currently, he has not been part of any rumors and controversies yet. However, in 1966, he was arrested for selling one ounce of marijuana in San Francisco.

Howard Hesseman has a height of 5 feet 11 inches. Additionally, he weighs is 62Kg. His hair color is light and his eye color is blue.