Skip to content
Married Biography
Married Biography / Entertainment / “King of All Media” Howard Stern makes his first appearance on The Ellen DeGeneres Show. Also offers her a kiss as a remedy to distract Ellen and viewers from the controversy received for laughing with President George W. Bush

Updated On November 2, 2021 | In Interesting Facts , Relationship
Share this 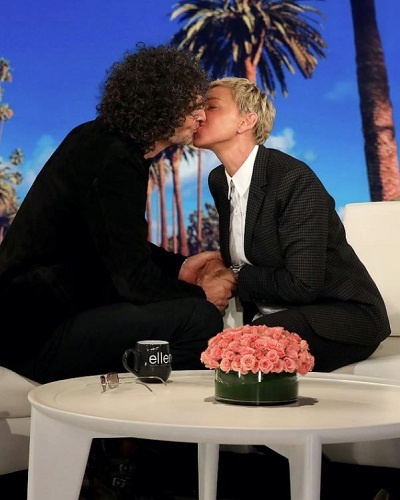 Howard’s appearance on Monday’s episode is his first-ever appearance in the show. On the 16-year history of the show, this “King of All Media” has never been here. He said:

“This is the pinnacle of my career, but to one day, to be on the Ellen DeGeneres show.”

Howard Stern kisses me one minute, the next he’s marrying another woman.

Stern appeared with his wife Beth (in the audience). During Kimmel’s late-night talk show, Stern proposed to her again. They celebrated their 11-year anniversary earlier this month.

Also read: Nick Jonas joining Blake Shelton, John Legend and Kelly Clarkson on The Voice as a coach for Season 18!

Howard knew about the controversy that Ellen received for laughing with President George W. Bush. It was during an NFL game of last week. In order to distract Ellen and viewers from the controversy, Howard created a remedy by offering to kiss her. Moreover, Ellen also defended herself on her talk show previously.

Yes, that was me at the Cowboys game with @GeorgeWBush over the weekend. Here’s the whole story. *link in bio

“People were giving you grief about this George Bush picture, But listen, you know, I’m always with you. I’m on your side. The problem is—and this is a brilliant booking on your part, having me on the show—people have this picture in their mind of you and George Bush. What you need to do, in my opinion, is take a picture with me, making out with me.”

Stern also thought that if people would see Ellen with him then no one’s going to be thinking about George Bush. Even though Ellen seemed to hesitant the remedy at first. She even tried to change the subject, but Stern had already made his mind.

After that, they both came to the conclusion that there would be “no tongue”. Ellen also revealed the names of men she has kissed Colin Farrell and Leo DiCaprio. Stern said:

“This is the picture that’s going to make America forget that you were sitting next to George W. Bush”

Stern and Ellen: Did not have a good relation in the past

It seems they did not have on the best of terms. During a radio show in February of 2010, Stern threatens to walk off her then-position. It was during the time when Ellen was as an American Idol judge and Stern was considered to be added to the panel.

Later, Stern signed on America’s Got Talent. During a broadcast on February 11, 2010, Stern said:

“Ellen DeGeneres is such a jerk, She’s such a foul piece of garbage, people who work with her know … she’s a tyrant ogre, this whole nice girl image is a lot of horses*** fakery – she’s miserable, and she is a miserable woman.”

In 2012 on the basis of sexuality, Ellen was made spokesperson of JCPenney. It was the time when she was threatened to boycott by a group called One Million Moms. Stern came to her defense and hence their relationship was rectified.

The duo was invited at a bash Kimmel and SiriusXM show together. It seems past things have settled very well.

A Short bio on Ellen DeGeneres and Howard Stern:

New York-born Howard Stern is one of the eminent figures in the entertainment industry. He is an influential person in the world of radio hosting. Similarly, Howard Stren is also a television personality, producer, and author. Additionally, he has also been into the acting industry, and in photography. He is famous by his nickname, “King of All Media.” more bio…