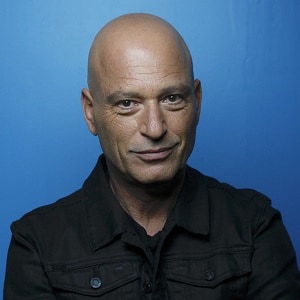 I'm from Canada, so Thanksgiving to me is just Thursday with more food. And I'm thankful for that.

[on his on- and off-screen chemistry with Norman Lloyd, who played Dr. Daniel Auschlander]: He was very inspirational between scenes, always cheering up everybody, and always smiles when Norman Lloyd passed through!

Howie Mandel is a married man. He is married to Terry Mandel.

The pair married on 16 March 1980. They have three children from this marriage, Alex Mandel, Jackie Mandel, Riley Mandel.

Mandel’s marriage is going strong as there is no news regarding any extramarital affairs at present.

Who is Howie Mandel?

Howie Mandel is a Canadian actor, television host, and comedian. He is the host of the NBC game show ‘Deal or No Deal’.

Additionally, he is also a judge on NBC’s ‘America’s Got Talent’. He created and starred in the children’s cartoon ‘Bobby’s World’.

Mandel was born as Howie Michael Mandel II in Willowdale, Toronto on November 29, 1955. He was born to parents Al Mendel and Evy Mendel. His father worked as a lighting manufacturer and a real estate agent.

He became interested in the world of comedy since his childhood years. He is of Canadian nationality. Furthermore, he belongs to the Ashkenazi Jewish ethnic background.

Howie Mandel initially worked as a stand-up comedian at Yuk Yuks in Toronto. He performed a set at The Comedy Store and then became a regular performer there. He received media attention after he began playing the role of Dr. Wayne Fiscus on ‘St. Elsewhere’.

Additionally, he also made a cameo in the Michael J. Fox’s ‘The Iceman Hummeth’. He also had roles in ‘Muppet Babies’, ‘A Fine Mess’, ‘Faerie Tale Theatre’, ‘Little Monsters’, and ‘Good Grief’. Since then, he has appeared in numerous other movies and television series. Furthermore, he has also produced and written several movies and television series. All in all, he has over 60 credits as an actor.

Some other movies and television series that Mandel has appeared in are ‘Superstore’, ‘YidLife Crisis’, ‘Fugget About It’, ‘7 Days in Hell’, ‘The Dating Guy’, ‘Monk’, ‘The Great American Christmas’, ‘Crown Heights’, ‘Hansel & Gretel’, ‘Spin Cycle’, ‘Sunset Beach’, and ‘Bobby’s World’ among others.

Mandel currently hosts ‘Deal or No Deal Canada’ and ‘Deal or No Deal’. Additionally, he replaced David Hasselhoff as one of the judges on NBC’s ‘America’s Got Talent’ alongside Simon Cowell, Mel B, and Heidi Klum. He has spoken publicly about his problem of obsessive-compulsive disorder.

Mandel garnered the Primetime Emmy nomination in 2008. Additionally, he has also received the CableACE and Daytime Emmy Award nominations. All in all, he has 2 wins and 8 nominations to his name to date.

Mandel has not revealed his current salary. However, he has an estimated net worth of around $40 million at present.

Mandel became part of a controversy after he commented “This is probably going to come out wrong, but you, sir, make bulimia entertaining” to Steve Starr whose talent is swallowing things and regurgitating them.

At present, there are no rumors concerning Mandel’s life and career.

Talking about his body measurement, Howie Mandel has a height of 5 feet 10 inches (1.77 m). Additionally, he weighs around 77 kg. Furthermore, he is bald and his eye color is dark brown.