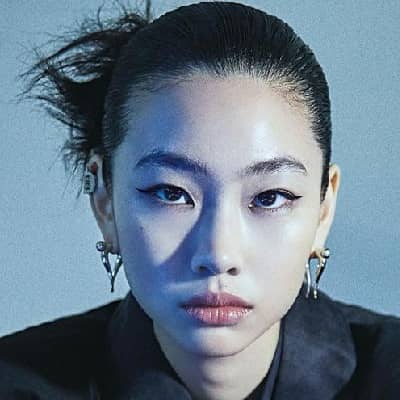 HoYeon Jung is currently in a romantic relationship with Lee Dong-hwi. Her companion is also one of the recognized actors from South Korea. The couple has been together since 2016.

Moreover, they have been keeping their relationship away from the spotlight.

Who is HoYeon Jung?

HoYeon Jung is a fashion model and actress from South Korea. She was placed second on the 4th season of the Korean reality television show, Korea’s Next Top Model.

Recently, she made her acting debut in the Netflix series, Squid Game which was released worldwide on September 17, 2021.

The name of her mother is Eunjin Park whereas her father’s identity is still under review. She once appears in an interview with her mother and grandma, Boksun Im. She is the eldest child of her parents.

HoYeon has two younger siblings named Yun Jung (sister) and a brother whose name is unknown. Talking about her academics background, she went to Hyewon Girl’s High School. She then completed her further studies at Dongduk Women’s University.

Further, she holds Korean nationality and her ethnicity is Asian.

At the age of 16, HoYeon started her modeling career. Before signing to ESteem Models, she modeled in Seoul Fashion Week without an agent. In 2013, she competed in season 4 of Korea’s Next Top Model. Sadly, she was eliminated by episode two but she returned to the competition in episode five.

She later being one of the runner-ups of the competition. After her success on Top  Model, Jung featured in several top fashion magazines such as Vogue Girl Korea, Nylon Korea, and ELLE Wedding. In 2016, she internationally debuted as a Louis Vuitton with Opening Ceremony. Similarly, she has been on the cover of Vogue Japan, Vogue Korea, W Kores, and Harper’s Bazaar Korea. On January 13, 2020, Jung has signed with Saram Entertainment as an actress.

Soon after, she made her acting debut in the Netflix series Squid Game. The series features the personalities like Lee Jung-Jae, Park Hae-soo, O Yeong-su, Jung Ho-Yeon, Kim Joo-ryoung, and more.

The actress has managed to maintain a clean profile to date. She hasn’t been part of any sort of rumors and controversy that create a huge buzz in the media.

Jung might have accumulated a decent amount of fortune throughout her profession as a model and actress. As of now, she hasn’t disclosed her exact net worth, salary, and other earnings in the media.

Talking about the income of other cast members of the Squid game, Lee Jung Jae who portrayed the role of Seong Gi Hun aka player 456 is speculated to received $344 thousand per episode.

He is the highest-paid Korean actor in the series and has an estimated net worth of $2 million.

The actress has an impressive height of 5 feet 9 inches tall. Likewise, her weight is about 59 kg. She naturally has black hair color and her eyes color is dark brown.