Hugh Hefner was an American magazine publisher. He was the founder and editor-in-chief of Playboy magazine. 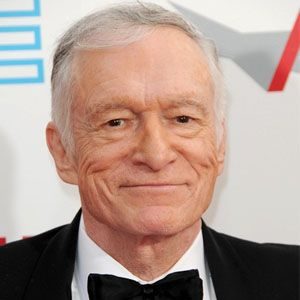 To pursue your dreams, to have them come true, to have made a difference, to have changed society, to have fought against powerful forces... that's a life well-spent

Picasso had his pink period and his blue period. I am in my blonde period right now

Surrounding myself with beautiful women keeps me young.

Hugh Hefner had been married three times until now. Other than that, he had had an affair with more than 65 girls till now.

Well, you can guess why he was known as the ultimate playboy. Discussing his marriage, till his death, he was married to Crystal Harris. Crystal is an American glamor model.

In addition, she is also a singer, DJ, and television personality. They started dating in January 2009. The next year they got engaged on December 24, 2010. A couple of years later, they tied the marital knot on December 31, 2012, in a private ceremony in the Playboy mansion. His wife

Before this, he was married to a model/actress, Kimberly Conrad. The marriage ceremony took place in 1989. Together, they have two children named Marston Glenn and Cooper Bradford. Marston was born in 1990 and Cooper was born in 1991. But after a decade of marriage, they got divorced.

But before all of these, his first marriage was with Mildred Williams. They married in 1949. Together, they have two children named Christie Hefner, and David. Christie was born in 1952 and David was born in 1955.

Other than three marriages, he had a 7-year long affair with showgirl/model/author, Holly Madison.

Who was Hugh Hefner?

Hugh was a famous personality. He was a well-known entrepreneur and businessman. Moreover, he was most popular as the founder of the “PLAYBOY” magazine.

The name Playboy is not only limited to his magazine. But he is also famous as a playboy in real life.

As of now, he was mostly celebrated in the media as the founder of the magazine that changed the men’s lifestyle. Additionally, he also worked as the writer for the military magazine during World War II.

Previously, he served as the journalist and copywriter for another men’s magazine, “Esquire.”

Hugh was at his home in Holmby Hills, Los Angeles, California, when he said goodbye to the world. He was 91 years old and died on September 27, 2017.

His death cause was due to E. coli infection.

Hugh Hefner was born in Chicago in the state of Illinois where he spent his childhood. He was born on April 9, 1926, as Hugh Marston Hefner. His mother name was Grace Caroline.

Similarly, his father name was Glenn Lucius Hefner. Both of his parents were a teacher.

He had a Swedish background from his mother side. And he was the mixture of German and English from his father side.

Discussing his education, he had attended Elementary School and Steinmetz High School. Afterward, he enrolled at the University of Illinois. Later he graduated from there with a Bachelor of Arts degree in psychology. Additionally, he also completed his double minor in creative writing and art in 1949.

Then to study sociology, he joined Northwestern University. But he dropped out of the University after a semester.

Hugh Hefner started his career as a writer for the military magazine during the 2nd world war. Professionally, he worked for “Esquire” as a journalist and a copywriter. After getting refused for pay raise, he launched his magazine, “Playboy.” The first feature of the magazine was in 1953.

The first issue covered pictures of Marilyn Monroe including her nude photos. It sold over 50,000 copies. Afterward, he kept on working as editor-in-chief and creative head for his magazine. Additionally, he also featured in several TV series including “The Simpsons.”

Furthermore, he also acted in some films. He also co-created a television series, “The Girl Next Door” and featured in it.

As of now, he had made a hefty amount of net worth. It was estimated at around $43 million. But there are no details about his salary and other incomes.

Talking about Hugh rumors he had often made headlines and buzz in the media. It is because of his lifestyle and relation with several girls.

Previously, in 2015, actress, Holly Madison accused him of manipulating her and not treating her well.

Hugh Hefner had a height of 5 feet 10 inches. Similarly, his body weight was somewhere around 71 kg. He had salt and pepper hair color and dark brown eye.