X-Men starrer Hugh Jackman is an Oscar-nominated Australian actor. He is married and a father of two. 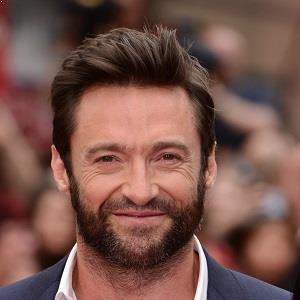 Now I meet people with full-color Wolverine tattoos on their backs. Thank God I did okay, because I think if I handn't, they'd spit on me in the street. - on his role of Wolverine.

Acting is something I love. It's a great craft that I have a lot of respect for. But I don't think it's any greater challenge than teaching 8-year-olds or any other career. In my life, I try not to make it more important than it is and I just hope that rubs off on the people around me.

Becoming a father, I think it inevitably changes your perspective of life. I don't get nearly enough sleep. And the simplest things in life are completely satisfying. I find you don't have to do as much, like you don't go on as many outings.

When I came out of drama school I was like, 'I'm going to do anything I can just to keep working'. In drama school you do Shakespeare to movement to circus skills to singing all in one morning. I know a lot of people hated it but I reveled in it. I loved it. It's weird how it evolved.

The things that I really cherish are the everyday moments, like sitting around cooking pancakes together on Sunday morning, or getting home after a tough day and my kids come up and give me a hug and remind me what's really important.

What is the relationship of Hugh Jackman?

Hugh Jackman is a married man. He is married to Australian actress Deborra-Lee Furness. The pair married on April 11, 1996. They have adopted two children – Oscar Maximillian and Ava Eliot. The marriage is going strong as there is no news regarding any extramarital affairs at present.

Who is Hugh Jackman?

Hugh Jackman is an Oscar-nominated Australian actor, singer, and producer. People mostly recognize him for his long-running role as Wolverine in the ‘X-Men’ film series.

Additionally, he has had leading roles in several popular movies including ‘Van Helsing’, ‘The Prestige’ and ‘Les Misérables’ among others. He is one of the most recognized faces in the show business.

Jackman was born in Sydney, Australia on October 12, 1968, to parents Grace McNeil and Christopher John Jackman. Additionally, he has four older siblings and has a younger half-sister, from his mother’s remarriage.

He has always wanted to become an actor since his childhood years. He is of Australian nationality. Furthermore, he belongs to a mixed ethnic background of English, Scottish, and Greek.

Additionally, he also attended the University of Technology, Sydney, and graduated in 1991 with a BA in Communications.

Similarly, Jackman also appeared in the TV series ‘Halifax f.p.’, ‘Viva Laughlin’, and Saturday Night Live. Since then, he has appeared in numerous other movies and television series. All in all, he has over 50 credits as an actor.

Some other movies and television series that Jackman has appeared in are ‘Logan’, ‘Eddie the Eagle’, ‘Pan’, ‘Chappie’, ‘Prisoners’, ‘Movie 43’, ‘Real Steel’, ‘Butter’, ‘Snow Flower and the Secret Fan’, ‘Deception’, ‘The Fountain’, ‘Kate & Leopold’, and ‘Kate & Leopold’ among others.

Additionally, he also has 19 credits for soundtracks and 8 credits as a producer. In addition, Jackman is also involved in several charity works. He is a longtime proponent of microcredit and a global advisor of the Global Poverty Project. He supports the Port Adelaide Football Club in the Australian Football League.

Jackman garnered the prestigious Oscar Award nomination in 2013 for his performance in ‘Les Misérables’.

Additionally, he has also won the Primetime Emmy Award, Saturn Award, Awards Circuit Community Awards, and Bambi Awards Among others.

Jackman has not revealed his current salary. However, he has an estimated net worth of around $180 million as of 2022.

Jackman’s several roles in movies have been controversial multiple times over the years. He was also criticized for his sexist comments in December 2017. Furthermore, he is currently on the news due to his comedic feud with actor Ryan Reynolds.

Talking about his body measurement, Jackman has a height of 6 feet 2 inches or 188 cm.  Additionally, he weighs around 85 kg or 187 pounds. Furthermore, his hair color is dark brown and his eye color is light brown.