Skip to content
Married Biography
Married Biography / Entertainment / Hugh Jackman: his family vacation in Greece, his ‘greatest’ wife and his struggle with his skin cancer: Know on it here!

Hugh Jackman: his family vacation in Greece, his ‘greatest’ wife and his struggle with his skin cancer: Know on it here!

Posted by MarriedBiography Last Modified May 27, 2020 | In Child , Lifestyle , Relationship
Share this

Hugh Jackman on a Greek getaway

The Australian actor, singer, and producer Hugh Jackman is presently on a holiday on the Greek Island of Delos. He posted some of the photographs of this trip. His great athletic body was obvious in these snaps. In the first photo, Hugh Jackman posed in a white tight T-shirt which revealed his gym-toned chest and bulging biceps. He was at the ruins of the ancient ‘Oeatpon amphitheater’ on the Delos Island. He also was in white Capri pants and had covered his eyes with slick aviator sunglasses. And he was holding a straw hat and seemed to be looking at the far distance. In the second photo, he had posed on a beach against the backdrop of the beautiful crystal clear blue waters. He had captioned this picture as:

“Yassou! [Hello in the Greek language].” 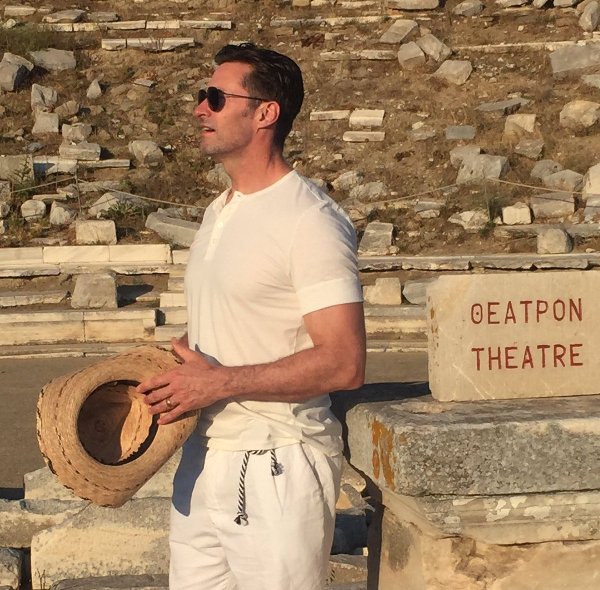 Hugh Jackman had also covered his head with the straw hat and worn his sunglasses. He could be seen wearing a black and blue rash shirt. Hugh Jackman was on the Island on a family holiday with his wife of 21 years, Deborra-Lee Furness and their two children, son Oscar, 17, and daughter Ava, 11.

The family also visited the small island of Antiparos in the Southern Aegean, 1.9 km from Paros. On this island, he was in T-shirt and shorts. They also rode a speedboat.

After his busy schedules to promote his latest science fiction movie ‘Logan’, this trip was much needed. Hugh Jackman has been globe-trotting in the last few months and has paid visits to Italy, Spain, and Japan. His wife had documented their Japan tour on her Instagram. Hugh Jackman is slated to play the role of US political leader Gary Hart whose bid for the president was toppled due to allegations of an affair.

Hugh and his family

Actor Hugh Jackman had married Deborra-Lee in Melbourne in 1996. He had met her on the set of the Australian TV show ‘Correlli’. They could not have children. Their natural and In-Vitro-Fertilization (IVF) trials failed. They ultimately decided to adopt children and Ava and Oscar are their adopted children. Speaking of them, Hugh Jackman said:

“I don’t think of them as adopted – they’re our children,”

Ava was welcomed into the family in 2005. Talking about his son who was born in 2000, Hugh Jackman had revealed that his son feels that he is neither tough nor cool like his character Wolverine.

Hugh Jackman is a total family man. He had recently revealed that in spite of their busy schedules, he is never away from his wife for more than two weeks. His wife, 61 is his partner in the production line.  Hugh Jackman called her ‘the greatest woman alive’. Hugh Jackman was on ITV’s show ‘Lorraine’ to promote his latest musical project ‘The Greatest Showman’ which is scheduled for Christmas day release.

Hugh Jackman admitted that Deborra-Lee is his biggest support both in his personal and professional life, and his best friend. He said:

“But we met on my first job when she was already a big star, I was a nobody. So we have shared everything, all the ups and downs, and always will.”

He also talked about his musical project saying:

“I loved filming it. I’m more comfortable singing and dancing than anything.”

“This character  is made for me. It’s about hope and power of imagination, a true rags to riches story. My dreams as a kid were to be a rock star so this was really great.”

The actor said that his daughter also approved the project. He also said that his Wolverine character is not yet over and it will return just like the James Bond or Batman.

Hugh Jackman has some health issues. He has been suffering from recurrent skin cancers. The first time was in November 2013 with a bleeding nose. He consulted a doctor who diagnosed a skin cancer and excised it. The second time it was like a freckle but cancerous. He had his sixth cancer removed from his nose in February 2017.

He gets his skin checked every three months to rule out basal cell carcinoma. He uses sunscreens but says that the cancer was supposed to his not using the sunscreens when he was small. However, the handsome hunk does try to stay positive about his health. He also thanked his doctors whom he thought are doing an amazing job.

Basal cell carcinoma is low-growing cancer and rarely spreads to other body parts. It is the most common form of skin cancer. In 50% of those diagnosed, cancer may recur within 5 years. This cancer develops on sun-exposed areas such as the face and neck. Though not invasive, it can turn aggressive and hence needs treatment in the form of surgical excision.