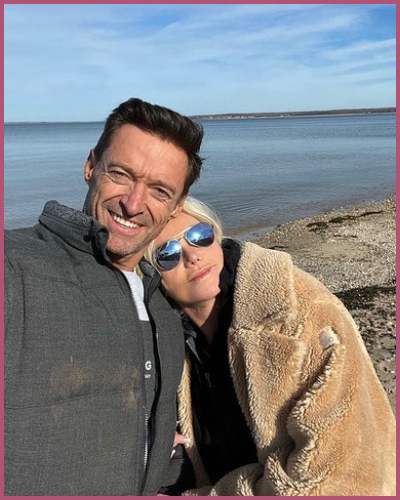 Hugh Jackman, 53, and Deborra-Lee Furness, 66 marked the 26 years of milestones together.

Congratulations are in order for the power couple. On Monday (April 11), the Australian actor paid tribute to his wife via the social media platform as they marked their 26th wedding anniversary together.

He shared a lovable selfie of them posing on a beach with a sweet message. He captioned the posts,

“Today I celebrate 26 years of marriage to my extraordinary wife. Every single day is filled with so much laughter, joy and backgammon!!!! Deb you light up my life. I love you with all my heart!”

The two first met on the set of the Australian drama Corelli and after a year of meeting, they got married on 11 April 1996, at a church outside Melbourne.

Also read “Hugh Jackman: his family vacation in Greece, his ‘greatest’ wife and his struggle with his skin cancer: Know on it here!”

When PEOPLE asked about the secret to their happy marriage, Jackman told that ‘making time for each other’ and ‘always learning’ from one another. He said,

“We’re always learning and humans change so you have to, even though we’ve been together 25 years, you gotta reset all the time. I’m always reeling in how funny she is and how amazing she is and how smart she is. The longer it goes on the better it gets.”

Also read “Hugh Jackman Compares The Character Of Wolverine To Batman And James Bond; Comments On The Mutants Return”

Hugh Jackman is an Oscar-nominated Australian actor, singer, and producer. People mostly recognize him for his long-running role as Wolverine in the ‘X-Men’ film series.

Additionally, he has had leading roles in several popular movies including ‘Van Helsing’, ‘The Prestige’ and ‘Les Miserables’ among others. He is one of the recognized faces in the show business.

Deborra-Lee Furness is an Australian actress as well as a producer. Furness rose to fame for her appearance in films and television series like Fire, Angel Baby, Shame, The Humpty Dumpty Man, Sleepwalking, and Blesses. She started working in the entertainment field in 1975. She is famous as the wife of actor Hugh Jackman. See more…

Who is Kenedi Anderson from ‘American Idol’? Did she make it to the top 24?
Tags : Actor Producer Singer