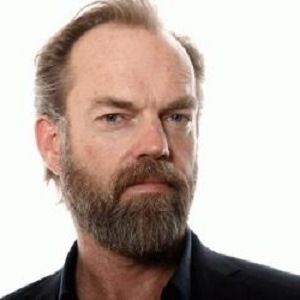 I think I said something like The Interview (1998) was the most fulfilling experience from an acting point of view. And it definitely was. That was a combination of working with a director who was very open and very prepared, and ... working with [co-star] Tony Martin - just sitting opposite him every day, which is pretty much what we did because the film is essentially a dialog between two men

You're certainly pushed into selling yourself as a commodity in order to sell the product. I will engage in the selling of the film. But I will try not to engage in the selling of the image, because I find that it's easier to go on and make another film, because the next character is actually obstructed if your image is bigger than it. So the longer you keep the mask on, metaphorically and physically, the better.

Hugo Weaving is a married man. He has been in a long term relationship with his girlfriend Katrina Greenwood from 1984.

However, they are not married yet because Hugo thinks that marriage is not important, it’s just that the relationship has to be solid.

The couple has two children namely, Harry Weaving, and Holly Weaving. His son Harry is a stage actor.

Who is Hugo Weaving?

Hugo Weaving was born in Ibadan, Colony, and Protectorate of Nigeria on April 4, 1960, age (58). He is the son of Wallace Weaving (father) and Anne Lennard (mother).

His father was an acclaimed seismologist and his mother worked as a tour guide and a teacher.

Additionally, his father’s work took him to different places from time to time, and as a result, Hugo spent most of his childhood living in Nigeria, England, and Australia.

When he was 13 years old, he suffered from a disease called Epilepsy, which is a neurological disorder. And when he was 18, the disease stopped affecting him, however, still he tries not to drive whenever possible.

He has two siblings namely, Anna-Jane Weaving and Simon Weaving. He belongs to Nigerian- British- Australian- English nationality and English ethnicity. His birth sign is Aries.

On talking about his education, he attended The Downs School. Then, he attended Knox Grammar School. Lastly, he graduated from the National Institute of Dramatic Art.

On talking about his profession, Hugo Weaving made his acting debut with a small role as a student in the film ‘…Maybe this Time’ in 1981. Whereas, his television debut happened in 1984 with a role in the series ‘Bodyline’, where he played the role of an English cricketer. Then, he also appeared in several TV series’ such as ‘The Dirtwater Dynasty’ and ‘Barlow and Chambers: A Long Way from Home’.

In the early 90s, he finally started gaining recognition for his roles in films such as ‘Proof’ and ‘Reckless Kelly’.  During 1993, he also appeared playing starring roles in the films such as ‘Frauds’ and ‘The Custodian’. In the next year, his career in the film ‘The Adventures of Priscilla, Queen of the Desert’. Likewise, his role as a drag queen brought him international fame. Whereas, in the coming years, he further gained prominence as he provided his voice to the film ‘Babe’.

Similarly, in 1999 came the project that turned his life around. Additionally, his portrayal as a stiff, stoic evil AI brought him the super-stardom in Hollywood. He went on reprising his role as Mr. Smith in the two subsequent installments titled ‘The Matrix Reloaded’ and ‘The Matrix Revolutions’.

During 2001 he also bagged another major role in a Hollywood project. He earned the role of a half-elven lord named Elrond in the film series ‘The Lord of the Rings’. Likewise, in 2005, he also rejoined the directors of ‘The Matrix’ to star in their film ‘V for Vendetta’. Then, he also played the role of an anarchist named V who always has a mask on.

Additionally, he also received critical acclaims for his roles in films such as ‘Last Ride’, ‘Oranges and Sunshine’. During 2015, he also earned one of the leading roles in the Australian film ‘The Dressmaker’ starring alongside Kate Winslet.

In the later years, he also has appeared in critically acclaimed roles in films such as ‘Hacksaw Ridge’ and ‘Jasper Jones’.

There is no information regarding his income, salary. Whereas, his net worth is estimated to be around $ 30 million.

On talking about his body measurements, Hugo Weaving has a height of 6 feet 2 inches. Additionally, he weighs is 83 Kg. In addition, his hair color is brown and his eye color is blue.