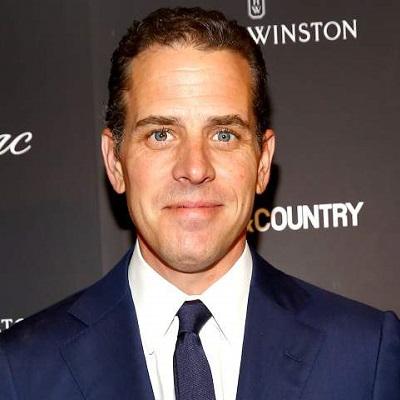 There's addiction in every family. I was in that darkness. I was in that tunnel—it's a never-ending tunnel. You don't get rid of it. You figure out how to deal with it

Hunter Biden is married to Melissa Cohen. Melissa is a South African Filmmaker by profession. The couple got married to each other in May 2019 in a secretive manner.

Later, in March 2020, they welcome their baby. As of now, he has not shared any details on his baby.

Prior to that, he was married to Kathleen Buhle. They married in 1993. After 22 years of marriage, they got separated from each other. Later, in 2017, they got divorced. Together, they have three daughters; Naomi, Finnegan, and Maisy Biden. Also, he is the father of Lunden Alexis Roberts (b. August 2018).

He has dated Hallie Biden in 2016. Hallie happens to be the widow of his elder brother, Beau.

Who is Hunter Biden?

American Hunter Biden is a lawyer and investment advisor. He is renowned as the second son of the 46th US president, Joe Biden.

He is also the founding member of the advisory firm, Rosemont Seneca Partners.

Hunter Biden was born on 4th February 1970 in Wilmington, Delaware. His birth name is Robert Hunter Biden. He is of British-Irish-French ethnicity.

He is the son of Neilia Biden-Hunter and Joe Biden. His father, Joe was the candidate for the President of the US from the Democratic Party against, President Trump. Also, his mother, Neilia was an educator by profession.

He had an elder brother, Beau Biden, and a younger sister, Naomi. Beau was a politician and lawyer by profession. He passed away on 30th May 2015. Also, his mother and sister passed away on 18th December 1972 in an automobile accident while Christmas shopping.

Later, his father remarried the educator, Jill Biden in 1977. From the marriage, he has a half-sister, Ashley.

Moving towards his academics, he completed his High School education at Archmere Academy in Claymont, Delaware. Later, in 1992, he graduated from Georgetown University with Honors in Arts majored in History.

In 1996, he earned a Law degree from Yale Law School. Prior to that, he attended the Georgetown University Law Center for a year.

– Following the graduation from law school, he joined the bank holding company, MBNA as a major contributor. In 1998, he became the executive vice president of the firm.

– After that, he joined the United States Department of Commerce focused on e-commerce policy. In 2001, he founded the firm, Oldaker, Biden & Belair. In 2006, he was appointed by the president, George W. Bush as the board of directors of Amtrak. Three years later, he resigned from the company.

– In September 2008, he founded the consultancy company, Seneca Global Advisors. The company helps other companies to expand their business in the foreign market.

– The following year, he co-founded the advisory firm, Rosemont Seneca Partners. In 2013, he joined the private investment fund, BHR Partners as a board member. He served the firm till 2020.

– In April 2014, he joined Burisma Holdings as a board member. Besides all this, he was also approved for the U.S Navy Reserve. However, he came positive during a test for cocaine during a urinalysis test and got discharged from the position.

He has blue eyes with brunette hair. He has decent height and average weight. However, details on his body stats are not available.

Hunter has been accused of setting up business deals in Ukraine and China using the influence of his father. The New York Post published the emails that took place between Hunter and an advisor of Burisma, Vadym Pozharskyi from April 2015.

However, As per Biden’s campaign, the vice president’s official schedule doesn’t show any record of such meeting with Pozharskyi.