Hunter King is an American actress. Hunter King has been engaged to her boyfriend, Nico Svoboda

Hunter King has been engaged to her boyfriend, Nico Svoboda in August 2018. They dated for two years before their engagement.

The marriage date has not been fixed yet. 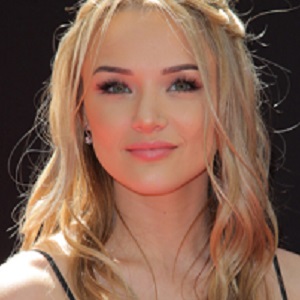 “The solution to putting an end to bullying is to stop it at the source but also to find out what is causing the person to behave the way that they do.”

Who is Hunter King?

Hunter King is an American actress and she is famous for her role as Adriana Masters in ‘Hollywood Heights’ in 2012, Summer Newman in ‘The Young and the Restless’ in 2012, and Clementine Hughes in ‘Life in Pieces’ in 2015.

She was born on October 20, 1993, in Ventura Country, California, USA. Her birth name is Haley Ashley King. Her father’s name is Terry King (Arm-Wrestling Champion) and her mother’s name is Jamie King.

She has got an older sister, Kelli (actress), and a younger sister, Joey King (actress). Her grandmother’s name is Elaine Farrar. Her family belongs to Jewish and Christian backgrounds.

She performed in a theatre in Agoura Hills, California at a young age. She holds an American nationality and her ethnicity is Ashkenazi-Jewish.

She has not provided any information regarding her education history.

Hunter King debuted her acting carer by guest-starring in the series ‘Roswell’, ‘Hannah Montana’, and ‘Workaholics’. She portrayed the role of Adriana Masters in the Nick at Nite drama ‘Hollywood Heights’. She met the executive producer of ‘The Young and the Reckless’, Jill Farren-Phelps in the theatre, and was offered to work on Y&R and play the character Summer.

Hunter made her debut on the CBS Daytime soap opera as Summer Newman by replacing Lindsay Bushman on October 15, 2012.

She made her guest model appearance on two episodes of ‘The Price is Right’ during ‘Dream Car Week’ in November 2013. She also played into more episodes of that series in October 2014.

Hunter portrayed the role of Avery Keller in ‘A Girl Like Her’ in 2015, and was cast as Clementine on the CBS comedy series ‘Life in Pieces’. She initially played a recurring role in season one and was later promoted to series regular for the second season and she left ‘The Young and the Restless’ to play as a regular cast member in the series.

Later, she announced that she will be back as Summer in ‘The Young and the Restless’ as a contract cast member starting June 4, 2018. She managed to work in both shows.

She was awarded Daytime Emmy Awards in the category Outstanding Younger Actress in a Drama Series in 2014 and 2015. She was nominated for the same title and the same category in 2016 and 2017.

She has an estimated net worth of around $3 million which she earned from her professional career.

This actress was accused by her Y&R co-star Michael Muhney in 2013, of allegedly groping her. She complained that he fondled her breasts on two occasions.

She warned producers that she would go to the police and file a report against him if he was not fired from the show. Later on December 17, 2013, he was fired from the show and it was stated that the allegations were false and were a mere rumor.

To know more about Kate French, Pisay Pao, and Cydia Batten, please click on the link.