Hunter March is an American game show host who is in a relationship with girlfriend Lex Lee since last five years. 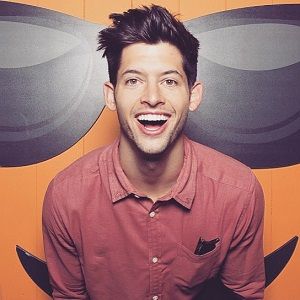 The 26-year-old American TV host and YouTube star, Hunter March is an unmarried man. However, he has been dating his longtime girlfriend Lex Lee for almost five years. They began going out in 2013 and still continuing their relationship.

Furthermore, Hunter March has been also sharing photos and videos with her on his Instagram as well as on YouTube. Besides her, he has never been seen with any other woman to date. Currently, Hunter and Lex are enjoying their love life and living elegantly.

Who is Hunter March?

Hunter March is an American TV host who is widely popular as the host of Emogenius on Game Show Network as well as for AwesomenessTV. Furthermore, he is also a YouTube star earning over 392k subscribers as well as an Instagram star with more than 108k followers.

Hunter March was born on April 5, 1991, in California, United States of America. Talking about his nationality, he is American and his ethnicity is unknown. He is the grandson of former game show host Hal March. Furthermore, he has a brother Dylan and three older step-brothers and a step-sister.

From the beginning of his childhood, he developed his interest in hosting as well as in acting. Concerning in his education, there is not any information regarding his educational background.

Hunter began his career as a TV host when he first joined AwesomenessTV as an intern in 2012. With his great vision and hard work, he became a producer and on-camera host in a short time. So far, he has hosted more than 2,000 episodes of various shows for AwesomenessTV. Moreover, he has been serving as the permanent host of the Daily Report for over five years.

Back in 2015, he started hosting AwesomenessTV’s larger-budget daily talk show “Top Five Live” and continued it till 2016. In addition, he also hosts You’re Busted alongside his best friend Nick Haddad. Besides this, Hunter is also the host of Emogenius on Game Show Network.

Furthermore, he is also a YouTube star earning over 392k subscribers as well as an Instagram star with more than 108k followers. Some of his most famous videos are I Made My Girlfriend Cry, Tinder Fail with Jennxpenn, Underwear for Two, and Girlfriend Tag. On his YouTube videos, he has also collaborated with Alex Aiono.

Being a famous TV host as well as a social media star, he earns hundreds of thousands of dollars. Although, his salary and net worth are unknown.

So far, he has not won any awards in his career. Although, his works have been loved and appreciated by many people around the world.

Moving towards his body measurements, he has a pair of beautiful brown eyes and dark brown hair. Apart from that, there is not any information regarding his height, weight, and other body measurements.

Additionally, he also runs a YouTube channel on which he has gained over 392k subscribers.

Reasons for the divorce of Maui Chapman and America bounty hunter Leland Chapman! Who is she?