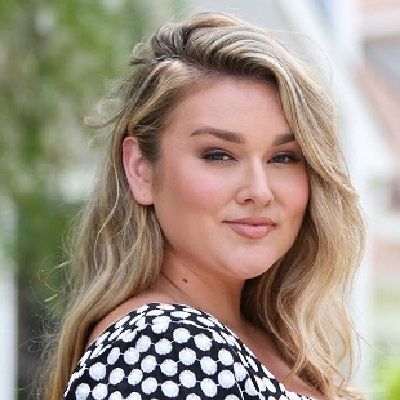 For me, being plus-sized, it was really hard to find any kind of wedding dress that I felt like myself in, I’m not ashamed of my body, and I wanted something that was really tight-fitting and shows off my curves

Society is always trying to dictate what a woman's body should look like, and that's especially true when women become brides, We're told we have to lose weight, that our arms have to look a certain way, that we need to change everything about ourselves before we walk down the aisle

I made a vow with myself and my fiancé that I would not get stressed over this wedding—so I called bulls--t on the idea that I should lose weight for my wedding.

Hunter McGrady is a married woman. She met Brian Keys through social media who has a daughter born in 2011. Then after dating for several months, Brian proposed her.
Their wedding took place on 16 June 2019 in Moorpark, California. The venue was covered with floral design matched with greenery with cream, white and champagne-colored flowers.
Hunter was seen wearing a beautiful and elegant gown which was in a mermaid style with shimmery lace. This gown was from the Watters.

Who is Hunter McGrady?

Hunter McGrady is an American model with a plus-size body figure. She has featured in the swimsuit illustrated issues in 2017.

She was born as Hunter Sienna McGrady on May 04, 1993, in Los Angeles, California, USA.

She has a sibling, her sister Michaela.

Regarding education, she has not revealed her academics details.

Hunter McGrady is a model and started her career at the age of 15. Due to her body figure, she started to pose as a plus-size model from 2012.

In the year 2017, she was featured in a Sports Illustrated Swimsuit Issue. She earned the title of the first plus-size model to appear in The Knot as a cover girl.

Hunter is associated with an agency like Wilhelmina Models (New York).

Hunter is not involved with any huge rumors or controversies. Her professional and personal life is not suffered from any scandals yet.

This popular model has an estimated net worth of $500 thousand.

According to the sources, the average salary of the model ranges between $20k-$200k per year.

McGrady has blue eyes and blonde hair. Her height is 5 feet 11 inches and weight is 108 kg.

Hunter McGrady has 17.9k followers on Twitter which she joined in July 2009. She is also has a Facebook account since May 2015 and has around 175k followers.