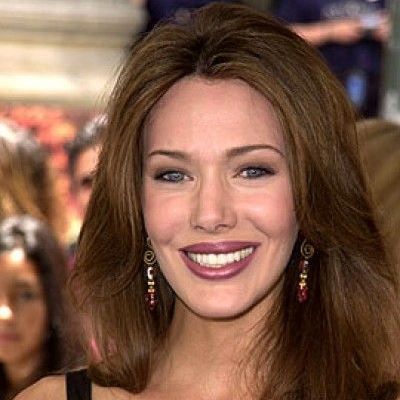 If I was a bad character that got away with murder like we see on other shows, I do not think I would like it because that sends a message that you can do these horrible things and never pay for it.

We were led to a pediatric ophthalmologist. It's a hard date for me, April 14, 1998. The doctor came back from the examining room and told us she had tumors in both eyes.

There was a storyline this year where Taylor lied to Brooke. It was supposed to be set up in a way that I was so outraged by her that I let it stay. I thought that was human, which was great.

Hunter Tylo has married three times to date. Her first husband was Tom Morehart. She was married to him in 1980 and has a son named Christopher.

She got divorced from her first husband in the year 1984. Additionally, her first marriage, Hunter had an affair with an American actor named Jon Hensley.

Later, Tylo married to an actor named Michael Tylo in 1987. Then, she has two daughters and a son named Izabella Gabrielle, Katya Ariel Tylo, and Michael Edward Tylo Jr. respectively from her second husband. Whereas, her daughter named Katya was diagnosed with retinoblastoma, a rare cancer of the eye.

Tylo’s second divorce was finalized in 2005. After two years on 18th October 2007, her son named Michael Tylo Jr. died by drowning in the family pool in Henderson, Nevada.

After her second divorce, Tylo dated an American actor named Lorenzo Lamas in 2006. In the same year, the couple broke up too. Then, after two years in 2008 Hunter dated Corey Cofield. She also filed a restraining order in 2008 May against her boyfriend by claiming that he acted violently with her children as well as to her.

Currently, Hunter was married to Gersson Archila. The couple tied the knot on November 29, 2009, in a secret ceremony which was held in Las Vegas, Nevada.

Who is Hunter Tylo?

Hunter Tylo is a former model, actress and also an actress. Likely, she is well known for her appearance on The Bold and the Beautiful as a Dr. Taylor Hayes.

Hunter Tylo was born in Fort Worth, Texas, the United States on July 3, 1962. Her birth name is  Deborah Jo Hunter and she is currently 57 years old. Her father’s name is Morris Jabez Hunter and her mother’s name is Jo Anne Hunter.

Talking about Hunter’s education history, she graduated from ‘Springtown High’ in 1980 and pursued a medical degree from ‘Fordham University,’ New York.

Talking about her profession, Hunter Tylo, credited as “Deborah Morehart,” made her film debut with the sorority slasher ‘The Initiation,’ with Daphne Zuniga.

Additionally, she subsequently gained popularity with regular roles in soap operas. During 1985, she was cast as a series regular in her first TV series, ‘All My Children.’ In the year 1988, she was fired from the show for getting married to her co-star Michael Tylo.

Likewise, in 1989, she was cast as ‘Marina Toscano’ in ‘Days of Our Lives,’ a villainous character who created trouble for the show’s most popular couple. In the year 1990, she was offered the role of ‘Dr. Taylor Hayes’ in ‘The Bold and the Beautiful’.

While she initially resisted accepting the part, discouraged by her lack of success in soap operas, she eventually relented and began her tenure on the show, while continuing to pursue her pre-med degree.

In the same year, she also appeared as ‘Senora Del Reynoso’ in an episode of ‘Zorro,’ titled ‘Family Business.’

Similarly, in 1994, Tylo starred as ‘Messua Shandar’ in the TV miniseries ‘The Maharaja’s Daughter.’ That year and the year that followed, she appeared as ‘Ingrid Rose’ and ‘Penelope Jordan,’ respectively, in two episodes of ‘Burke’s Law.’

In the year 1996, she appeared as ‘Heather’ in an episode of ‘Baywatch,’ titled ‘Windswept.’ In the following year, she guest-starred as ‘Claire McKenna’ in ‘Diagnosis: Murder.’

Hunter Tylo won the ‘Most Valuable Professional Award’ for the ‘Best Actress.’ She won the award again in 1997, followed by a ‘Telvis Award’ for the ‘Most Popular Television Stars in Finland’ in 1998, for her performance in ‘The Bold and the Beautiful.’

She won the ‘Telvis Award’ for ‘Favorite Foreign Actress’ in 2002, for the same show.

Hunter Tylo has an estimated net worth of around $13 million and she has earned that sum of money from her professional career.

There are no records of Hunter’s present rumors. Moreover, the sources have not mentioned any recent rumors of Hunter.

Hunter Tylo has a height of 5 feet 6 inches and she weighs is 65Kg. Additionally, she has a measurement of 35-24-35 inches and her bra size is 40C. Hunter’s hair color is brown and her eyes color is blue.

Furthermore, her dress size is unknown and her shoe size is 9 (US).