Posted on May 24, 2022 | In Entertainment , Interesting Facts
Share this 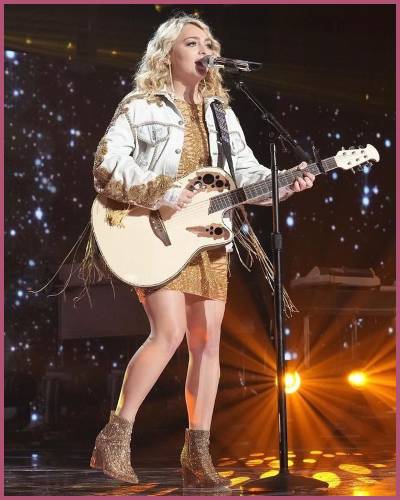 HunterGirl is one of the finalists of season 20 of ‘American Idol’ alongside Noah Thompson and Leah Marlene.

She is one of the prominent contestants in Season 20 of American Idol. Here’s what we know about a country singer.

HunterGirl is now 23 years old. She was born on May 22, 1988, in Gruetli-Laager, Tennessee. She rose to fame after appearing as a contestant on season 20 of American Idol.

The Country singer grew up in a military family along with her sister Rylan Wolkonowski. The name of his mother is Urla Wolkonoeski whereas her father’s identity is unknown.

At the age of 3, she started performing in her grandfather’s church as well as began writing. Similarly, she moved to Winchester, at the age of 11 where she used to participate in local singing competitions.

2) HunterGirl is not her real name

The country singer is popular with her stage name Huntergirl. However, her name is Hunter Wolkonowski.

She is originally from Winchester, Tennessee, however, she spent most of her time working on her music in Nashville.

HunterGirl is the first Platinum ticket holder of the season which sent her straight to the second round of Hollywood Week. She walked into the audition room with a guitar and sang “Riot” by Rascal Flatts where she impressed all three judges.

Judge Luke Bryan later invited her to perform at his bar Luke’s 32 Bridge in Nashville whilst there she received the Platinum Ticket.

Similarly, she got a chance to pick her duet partner in which she choose fellow contestant Cole Wesley Ritte. The two then performed in Fleetwood Mac’s “Dreams” which also shows her skills in classic rock.

Huntergirl has been announced the runner-up of the 20th season of American Idol on Sunday, May 22.

Congratulations are in order for HunterGirl! The 23-years old Country singer hit the stage with three songs for the last time, “Dancing in the Dark” for the Bruce Springsteen round, “Red Bird” and a reprise of “Riot” by Rascal Flatts.

Prior to American Idol, she participate in several local competitions where she won including the 2014 Texaco Country Showdown.

While in college, she won “Nash Next” songwriting contests and the prestigious Nashville Songwriter Association International two years in a row.

In 2018, HunterGirl has released her own music her first single, “We’re Not In Kansas Anymore”.

Similarly, she recently dropped an EP titled One Day which features 5 songs. Lately, she released the single “Red Bird”.

How much is Justin Timberlake Net Worth in 2022? Learn more on Wife, Children
Tags : American Idol season 20 Singer Songwriter