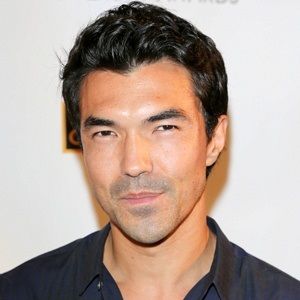 Talking about his relationship, he is a married man. He is married to his longtime girlfriend, Nicole Garippo. The couple tied the knot in October 2016. The couple has a daughter who is still in her infancy. They are living a happy life together with no sign of any marital affairs.

Who is Ian Anthony Dale?

Ian is an American actor, he is well known for his role as Adam Noshimuri, husband of former main character Kono Kalakaua, on Hawaii Five-0. Whereas, his other notable roles include Simon Lee on The Event, Davis Lee on Surface, Avatar Gamma on Charmed and Kazuya Mishima in Tekken.

Likewise, he has also appeared on shows such as Las Vegas, JAG, Day Break, CSI: Crime Scene Investigation, and Criminal Minds; in 2007 he also appeared in 24 as the minor character Zhou. During 2017, he has the main role as one of the leading characters in Salvation.

Ian was born in Saint Paul, Minnesota, the United States on July 3, 1978, to parents Jack Dale and Olga Dale. He has a sibling namely, Robert Dale.

On talking about his profession, during 2004, he appeared in the film as Mr. 3000 as “Fukuda”, alongside with Bernie Mac, Angela Bassett and Chris Noth. Whereas, his next movie role was in 2007’s The Bucket List as an instructor to Jack Nicholson and Morgan Freeman’s characters in one of the scenes.

During 2009, he also followed that up with a minor part in The Hangover, appeared in the independent film Lollipops, and starred in Tekken as Kazuya Mishima. Similarly, in 2010, he also appeared in the film Flying Lessons. On the same year 2010, he also portrayed Scorpion in the short film of Mortal Kombat: Rebirth on YouTube.

Moreover, he had his first television break on a 2002 episode of Fastlane. Then, he has also appeared in episodes of Angel, JAG, Las Vegas, Charmed, 24, CSI: Crime Scene Investigation, Criminal Minds, Dollhouse and Cold Case.

Likewise, his television roles have included recurring character Davis Lee on Surface and Detective Christopher Choi on Day Break. Similarly, he was a series regular in the NBC drama series The Event, which ran in the fall of 2010. Whereas, his most recent recurring roles include Hawaii Five-0 as Adam Noshimuri and Murder in the First as Lieutenant Jim Koto. Therefore, he also has a main role in the CBS TV series Salvation as Deputy Secretary of Defense Harris Edwards.

There is no information about his salary. Whereas, his net worth is around $3 million dollars.

On talking about his body measurements, Ian has a height of 6 feet. Additionally, he weighs is unknown. Ian’s hair color is black and his eye color is dark brown.

Also, read the affair, salary, the net worth, controversy, and the bio of  Brian Geraghty, Abigail Klein, Torrey DeVitto