Updated On January 13, 2022 | In Divorce , Lifestyle , Relationship
Share this 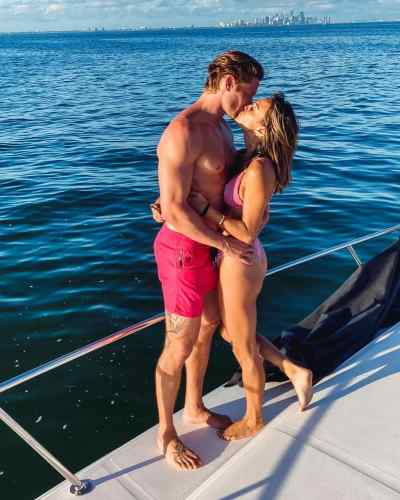 The country music singer Jana Kramer, 38 announced her divorce to her husband Mike Caussin in April 2021.

It’s been only 8-month Kramer filed the paperwork to end her marriage to Mike and she is already with a new man.

On 13 January 2022, Kramer officially announced or introduced her new beau Ian Schinelli via IG. She shares adorable pictures with him and captioned,

“Sometimes you just have to stop fighting it and listen to your heart. To find someone who doesn’t look at your scars as a challenge or problem but rather helps you hold them and stands there to encourage you with love, strength and empathy along the way.”

Kramer also shared an Instagram story video where Schinelli was doing some handy work and she joked that she had “found rental husband” as she handed him a pink screwdriver.

Ian, 36 is a fitness trainer by profession. According to his Instagram handle, he describes himself as ‘Not an Athlete’ and ‘Girl Dad’. He is active on Instagram under the username @officially_mr_e where he has more than 35.3k followers.

In 2010, he graduated from the Navy training academy in Coronado, California. Currently, he worked with a Nashville-based fitness center. Further, he often shares pictures with his daughter. He is a single parent too.

Before Ian, Jana was married to NFL player Mike Caussin. The two walked down the aisle on 22 May 2015. In the following year, they were blessed with a baby girl named Jolie Rae Caussin.

Between the years, the duo had ups and down relationships. In 2018, they welcome their second child a boy named Jace Joseph Caussin. After six years of marriage, Kramer ultimately filed for divorce against Mike citing Caussin’s infidelity.

She announced her split to Mike via an emotional social media post.

“‘It’s time.’ As I try to make sense of a reality I never wanted to believe could be possible again, those words have now become a reality,” she wrote on Instagram. “I’ve fought y’all. I’ve loved hard. I’ve forgiven. I’ve put the work in. I’ve given everything I have, and now I have nothing else to give.”

This was not the first time the news of their split comes. In 2016, they parted ways because of the sexual escapades of Mike Caussin. However, they later renewed their wedding vows in December 2017.

Jana Kramer is an American actress and country music singer. She is also known for a role in some projects called Click in 2006, Heart of the Country in 2013, and One Tree Hill. She is also regarded as one of the talented actress and also pretty looking actress. See more bio…