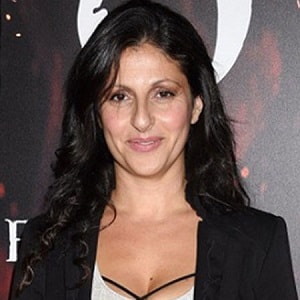 Ida Darvish is a married woman. She has been married to Josh Gad since May 10, 2008. Josh is a famous American comedian, actor, singer who is known for his voice of Olaf from Disney’s ‘Frozen’.

This couple has welcomed two children: daughter Ava Tanya Gad on August 2, 2011, and daughter Isabella Eve Gad on February 17, 2014. The family is currently living together in a beautiful house in Florida, USA.

Who is Ida Darvish?

She was born on October 14, 1975, in the USA. She is currently 43 years old and her birth sign is Libra. Ida is born to an Italian mother. However, she has not disclosed further information regarding her parents, siblings, and childhood.

Ida holds American citizenship but her ethnicity is unknown.

She began her career in the year 2001 after she appeared in a video named ‘The Holy Cannoli’. After that, she got the opportunity in several short videoes and made her big break in 2006 from American drama film named ‘The Astronaut Farmer’ in which she appeared as Italian Anchorwoman.

Likewise, she appeared in American comedy-drama television series ‘Californication’ as Marcy’s Client in 2008. Also, she worked as a producer and writer of the American TV series ‘Gigi: Almost America’ from 2011 to 2014. Apart from that, she is the producer and writer of ‘Rent Control’, ‘The Lost Nomads: Get Lost!’, etc. Her last appearance was in the American thriller film ‘Inferno’ in 2016 as Marta Alvarez.

It seems that Ida has not been awarded and nominated for her work till date.

Ida Darvish has a height of 5 ft. 5 inches and weighs62  kg. She has black eyes and black hair. But, other information regarding her body measurements, shoe size, dress size, etc. are unknown.