Updated On November 23, 2022 | Published By: Rounak Kumar
Share this
Married 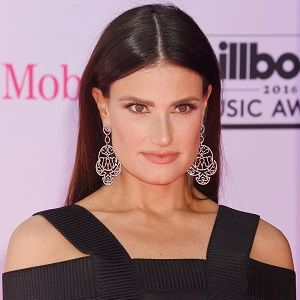 "It's hard to absorb and to allow all that attention and accolades for Rent because the rest of the country doesn't know who we are. Once I walk out of the door of Rent, and I'm on the subway, it doesn't matter. It's an exaggerated sense of fame." - on the international 'Rent' craze

Things happen for a reason, and in their own time

I've been singing since I was born. It's something I do everywhere I go. In the shower, walking down the street. I don't need any impetus to do it. I just sing

You can't get it all right all the time, but you can try your best. If you've done that, all that's left is to accept your shortcomings and have the courage to try to overcome them

If you follow your path and focus on love, things will work out.

When did Idina Menzel tie the knot with Aaron Lohr?

Idina Menzel is a married woman. She is in a marital relationship with Aaron Lohr. Aaron is an actor/singer.

He is known for his performance in “Rent,” “Newsies,” “A Goofy Movie,” and others. The couple tied the marital knot on September 22, 2017.

After the ceremony, she shared a beautiful picture of the bride and groom together in a lavish wedding gown and suit.

Since then they have been living together happily.

Who was she married to in past?

Before this, she was married to actor, Taye Diggs. This marriage ceremony took place on January 11, 2003.

The ex-couple spend many years together. But at last, it ended with their divorce in 2013.

During their time together, they had a son named Walker Nathaniel. Walker was born on September 3, 2009.

Who is Idina Menzel?

Idina Menzel is a fan’s favorite singer/songwriter. Additionally, she is also an actress.

Idina Menzel holds American citizenship. Presently, she is famous for her performance in musicals like “Rent” and “Wicked” winning the Tony Award for acting in Wicked.

Additionally, most people recognize her for giving voice to the character, Elsa, and for singing “Let It Go” in “Frozen.”

Idina Menzel was born on May 30, 1971, as Idina Kim Menzel. She was born in New York City in New York, the U.S. During her childhood, she lived in Syosset.

The name of her father is Stuart Mentzel. Similarly, her mother’s name is Helene.

While Stuart worked as a pajama salesman, Helene was a therapist. Idina Menzel has Russian and Polish ethnic background.

She spent her childhood in Syosset.

For her education, she went to some middle and then Syosset high school. Afterward, she enrolled at the Tisch School of the Arts of New York University to learn drama.

Later, she graduated from there with a Bachelor of Fine Arts degree in drama.

Idina Menzel is a singer/songwriter and actress by profession.

She kicked off her professional career by performing in the theatre musical, “Rent” in 1994.

Idina Menzel portrayed Maureen Johnson which earned her a Tony Award nomination. She replayed the role in 1996 in Nederlander Theatre.

Then in 1998, she launched her debut album, Still, I Can’t Be Still. Idina Menzel’s singing career was followed by other albums, Here and I Stand in 2004 and 2008 respectively.

She also played in plays like “Wicked,” “See What I Wanna See,” “If/Then,” and others. Idina’s performance in Wicked won her a Tony award.

Additionally, she also acted in TV shows and films.

She reprised the role of Maureen Johnson from the play in the film of the same name, “Rent” in 2005.

Some of her other movies are “Enchanted,” “Frozen,” and others.

She voiced Elsa and sang the song, “Let It Go” in the film “Frozen” in 2013. Furthermore, she performed in several television shows.

Presently, she earns a huge amount of salary and her net worth is estimated at $10 million.

Idina Menzel has been part of controversies and criticisms.

Previously on the 2015 new year’s eve, she missed a note while performing “Let it Go” to which the audience responded by criticizing.

It was after she posted in her defense instead of saying sorry for her mistake.

Presently, she is away from any rumors or controversies.

Idina Menzel in her forties has maintained her body.

She looks gorgeous and charming as always. While her height is 5 feet 4 inches, she weighs approximately 55 kg. Similarly, her shoe and dress size are 7 and 6 respectively.

Idina Menzel is very active on her social media handles. She likes to communicate and share her life with her fans.