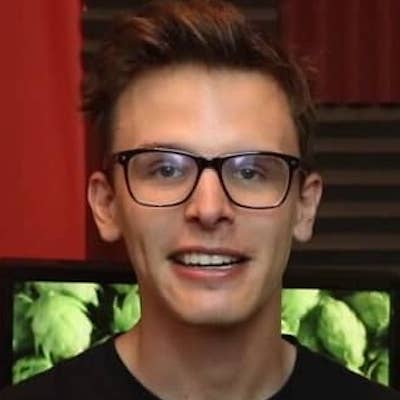 iDubbbz’s relationship status is married. He exchanged vows with his long-term girlfriend, Anisa Jomha in June 2021.

His wife is an influencer and mostly uses the Twitch platform.

They started their affair in 2016 and announced their engagement in April 2021. Their wedding took place in Nevada and was officiated by an Elvis impersonator.

iDubbbz is an American social media star and singer. He is known for his amazing content about games, vlogs, and Kickstarter Crap review series on YouTube.

In 2017, he released his first track titled “Asian Jake Paul“.

His birthdate is 27 July 1990 and he was born in San Antonio, Texas, the United States as Ian Carter. The name of his mother and his father is unknown.

iDubbbz’s ancestry is Caucasian and as per his academics, he is a high school pass out. He also enrolled at Kaplan University.

iDubbbz as of now is one of the popular web stars. He has a YouTube channel created in Aug 2012 with more than 7.85 million subscribers.

He has another channel titled iDubbbzgames in which Comedy & Entertainment content is uploaded. This channel has crossed 850k fans. He also runs other channels like idubbbzStream with 124K subscribers plus iDubbbz with 10.8K subscribers.

He is available on many social sites but not on TikTok. His Instagram and Twitter accounts are with over 1.4m and 1.3m followers respectively.

Also, he has more than 138k followers on the Facebook platform.

This YouTube sensation is keeping himself away from rumors and desperate scandals. But in 2017, one of his YouTube channels was hacked by a group named Lizard Squad.

iDubbbz’s height is 6 ft 2 inches and his body weight is 71 kg. Similarly, he has blue eyes plus his hair color is also dark brown.