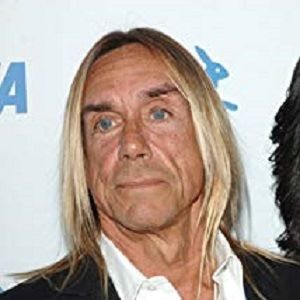 The most successful stuff is sold to you as indispensable social information. The message in the music is, 'We are terrible, terribly slick and suave, and if you listen to us, you can probably get a leg up in society, too.'

Punk rock is a word used by dilettantes and heartless manipulators about music that takes up the energies, the bodies, the hearts, the souls, the time and the minds of young men who give everything they have to it.

Then, he married Suchi Asano in 1984 lasted for almost fourteen years before ending in divorce in 1998.

Moreover, he married Nina Alu in November 2008 and is presently living in Florida with her. He also has a son with Paulette Benson.

Who is Iggy Pop?

Iggy is an American singer, songwriter, musician, producer, and actor. He is well known for his outrageous and unpredictable stage antics. Similarly, he has been regarded as the ‘Godfather of Punk’ in the music industry since his influential days with the proto-punk band ‘The Stooges.’

Iggy was born in Muskegon, Michigan, the United States on April 21, 1947, age (71). He is the son of James Newell Osterberg, Sr.(father) and Louella Christensen (mother). His father was a former high school English teacher and baseball coach at Fordson High School in Dearborn, Michigan. There is no information about his mother.

During the 2007 Rolling Stone interview, he explained his relationship with his parents and their contribution to his music. He went to school with the son of the president of Ford Motor Company, with kids of wealth and good grades. But he had a wealth that beat them all. His parents were his big support system as they gave him their master bedroom in the trailer because that was the only room big enough for his drum kit.

Additionally, there is no information about his siblings. He belongs to American nationality and mixed (Irish- English- Danish,- Norwegian) ethnicity. His birth sign is Taurus.

On talking about her education, He attended Pioneer High School. Then, he attended the University of Michigan.

On talking about his profession, during 1967, he became the lead vocalist of the newly formed band ‘The Stooges’ with Ron Asheton on guitar, Dave Alexander on bass, and Scott Asheton (Ron Asheton’s brother) on drums, alongside him. Whereas, they first played at a Halloween party with the members of MC5 in attendance.

Similarly, he was deeply influenced by the stage presence of Jim Morrison which drove him to build his own outrageous stage persona. Eventually, some of the members, including him, continued to perform together even after the disbanding. In fact, they became associated with David Bowie who helped them gather pace.

Thus, they decided to bring back ‘The Stooges’. Likewise, they also released their studio album ‘Raw Power’ in 1973 and it received a cult following in the coming years. Around this time, he was also struggling with the persistent problem of drug addiction.

Additionally, he also made the headlines for all the wrong reasons after he became involved in a brawl with a group of bikers. The Stooges disbanded once again. In the 1980s, he also released the studio album ‘Blah-Blah-Blah’ which became his first commercially successful work. Later, he also released two more very successful albums, ‘Instinct’ and ‘Brick by Brick’ in 1988 and 1990 respectively.

There is no information regarding her income, salary. Whereas, his net worth was around $ 20 million.

There was a rumor that he was gay. Currently, he is far from rumors and controversies regarding his personal and professional life.

On talking about his body measurements, Iggy has a height of 5 feet 6 inches. Additionally, he weighs is 65Kg. Iggy’s hair color is blonde and his eye color is grayish blue.

Also, read the affair, salary, the net worth, controversy, and the bio of Wanya Morris, Julianne Moore, Keri Russell