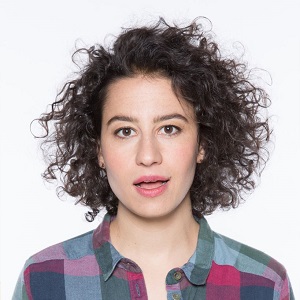 Ilana Glazer has been married to David Rooklin since 2017. He is a molecular scientist. There is no further information available regarding their current relationship status and about their children. The couple was in an affair since 2014 before they tied their knot.

Who is Ilana Glazer?

Ilana Glazer is an American actress, writer, and comedian. She is famous for co-creating and co-starring in the series ‘Broad City’. She has been nominated twice for the Critics’ Choice Television Award for Best Actress in a Comedy Series for the series.

She was born on April 12, 1987, in St. James, New York, USA. Her birth name is Ilana Rose Glazer and she is currently 31 years old. Her mother’s name is Sandi and her father’s name is Larry Glazer. They both work in insurance and finance. She has got a brother, Eliot with whom she grew up and she was raised in a Reform Jewish household.

She holds American ethnicity and she has Russian and Polish descent.

She attended Smithtown High School in Smithtown, New York and later graduated from the New York University in 2009, majoring in psychology.

She took training from the Upright Citizens Brigade Theatre, where she met Broad City co-star and co-creator Abbi Jacobson.

She appeared alongside Abbi Jacobson in ‘Broad City in 2009 which is a web series starring the two as fictionalized versions of themselves. The series got a positive response from the major media like USA Today, Entertainment Weekly, and The Wall Street Journal.

She got help from Amy Poehler to shop a pilot script based on the series. Poehler was agreed to star in the series finale. Glazer and Jacobson worked with Poehler as the producer, purchased a script commitment for the series but for the network did not approve the script.

They ignored to proceed with development. Then, they approached Comedy Central who made an agreement to purchase the script from FX and order a pilot.

Since she has been long term friend with Abby Jacobson and there is a rumor that she is dating her female co-star, Abby. But, both of them have kept their mouths closed when it came to answering the question regarding if they are dating one another.

Ilana has a slim body with a height of 5 ft. 1 inch and she weighs 52 kg. Ilana has got dark brown hair and dark brown eyes. Her body measurement is 33-22-33 inches.