American internet personality and a reality TV star. She is currently in a relationship. 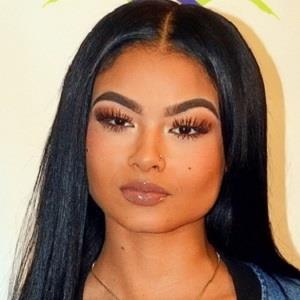 What is the relationship of India Westbrooks?

India Westbrooks is in a relationship. She is dating a basketball player named Dwayne Bacon. Their affair was started in Aug 2019.

Other guys that India has dated include Justin Combs, Lou1etay,  Cliff Dixon,  Rick Ross, and J’Leon Love. She does not have children from any of her relationships.

Who is India Westbrooks?

India Westbrooks is an American internet personality and a reality TV star. People mostly recognize her for her appearance in the reality TV series ‘The Westbrooks’ that revolves around India and her sisters Brooke, Morgan, Bree, and Crystal.

India was born in California on February 3, 1996, to parents Warren Westbrooks and Candy Westbrooks. She has four sisters, Brooke, Morgan, Bree, And Crystal, and also has two brothers.

Social media became a big influence in her early life throughout her childhood years which later helped her to gain fame worldwide. She is of American nationality. Additionally, she belongs to a mixed ethnic background of African-American, Spanish, Creole, and Indian.

Talking about her education, India completed her schooling at Santiago High School in California.

Initially, India Westbrooks created her first Tumblr in 2011. This was her first step in the world of social media. Since then, she has been active on numerous social media sites. On Tumblr, she used to post quite regularly but was not able to achieve the fame she sought as she faced frequent issues with hackers.

Eventually, India joined Instagram. She often posted her pictures on her account which in turn helped to draw in a huge crowd of admirers. Currently, she has more than 3.4 million followers. She gained much-deserved fame after the Westbrooks sisters were asked to star in their reality TV show, ‘The Westbrooks.’

The show stars India along with her sisters Brooke, Bree, Crystal, and Morgan and it premiered in 2015.

India does not have any awards nominations to her name as of now. She has not revealed her current salary. However, she has an estimated net worth of around $ 1 million as of 2022.

There was a rumor that suggested India was dating Canadian Singer Drake. However, this has not been proven as of yet. Additionally, India also became part of a controversy after her nude photos were leaked online.

Furthermore, she was also indirectly involved in the beef between Lil Yachty and Soulja Boy.

Talking about her body measurement, India Westbrooks has a height of 5 ft 3 inches. Additionally, she weighs 124 pounds (56 kg). Furthermore, she has a body measurement of 37-25-37 inches.

Her dress size is 8 and her shoe size is 7. In addition, her hair color is black and her eye color is dark brown.

How many kids does India love have?

What does India love do for a living?