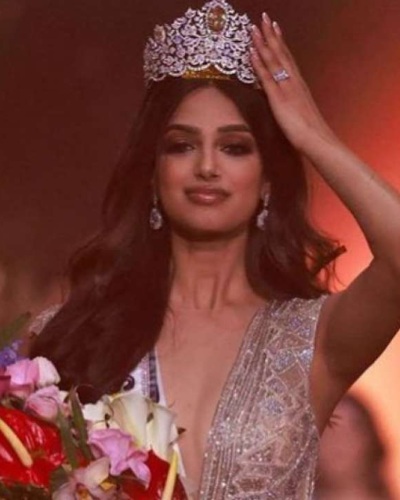 Harnaaz Sandhu has crowned the 70th Miss Universe on 12th December 2021. She beat 80 contestants in the pageant and won the title. She was crowned by the 2020 Miss Universe Andrea Meza at the 70th edition of Miss Universe held in Eilat, Israel. It was held in the Israeli Red Sea resort town of Eilat.

Likewise, the pageant was held in the middle of the night and wrapped up at 5 a.m. local time to accommodate the primetime schedule in the USA. The beauty contest included traditional displays of national costumes, swimwear, and a series of interview questions to test contestants’ public speaking skills. The top 10 contestants wore bedazzled full-length gowns in either gold, silver, or bronze.

Likewise, the top three contestants were Harnaaz, Paraguay’s Nadia Ferreira, and South Africa’s Lalela Mswane. Sandhu was asked about the advice she would give to young women on how to deal with the pressures they face. She replied,

“The biggest pressure the youth of today is facing is to believe in themselves, to know that you are unique and that’s what makes you beautiful. Stop comparing yourselves with others and let’s talk about more important things that’s happening worldwide.”

Hernaaz suggested they speak for themselves because everyone has a leader in their life and has a voice of their own. she believes in herself which is why she is standing there.

Also read Who Is The Winner Of Miss Universe 2019? Know About Her Bio, Net-worth!!

Who is Harnaaz Sandhu?

Harnaaz Sandhu is an Indian model and pageant winner of Miss Universe 2021. Previously, she was crowned Miss Diva 2021 and became the third Indian woman to be crowned Miss Universe. Sandhu was born on 3rd March 2000 in Chandigarh, India. Similarly, she attended the Shivalik Public School and Post Graduate Government College for Girls.