Indira Varma is an English actress of Kama Sutra: A Tale of Love, Game of Thrones, Paranoid, Carnival Row, and more. 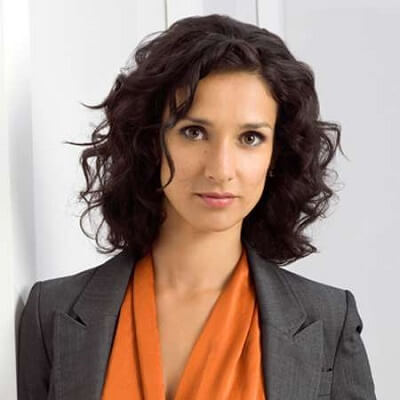 An actor matures with experiences, and the more the emotions he/she has been through, the greater the intensity of performances

I've love the challenge of doing something new. Bollywood is magical

I don't want to be an absent mother. Otherwise, why have children?

Indira Varma is a married woman. She is married to Colin Tierney. The couple dated for some years before exchanging wedding vows in 1996 in England. The ceremony was a private one in the presence of some close friends and family.

The couple is seen together in several movie premieres and award ceremonies. Form their marriage, the couple has a daughter named Evelyn. Together, the family of three live in Hornsey, North London.
She has not revealed her previous relationships.

Who is Indira Varma?

Indira Varma is an English actress. She is well-known for her work in Kama Sutra: A Tale of Love, Game of Thrones, Paranoid, Carnival Row, and more.

In March 2020, Varma revealed that she has been tested positive for the Coronavirus. She revealed this news just two days after her fellow Game of Thrones star, Kristofer Hivju revealed that he has also been affected by the virus.

She revealed this via a post on Instagram and admitted that she is not feeling very good.

Indira Varma was born in Bath, Somerset on 27 September 1973. As of 2021, her age is 48. Her father was an Indian whereas her mother was Swiss of Italian descent. She has not revealed their identities.

She does not have any siblings. Her parents were relatively older and people often mistook her parents for her grandparents.

Varma had a natural accent because of which she even faced some amount of racism in her childhood days. While growing up, she used gestures a lot when having a conversation which helped her become a mime artist at a young age. Her ethnicity is Mixed(Indian, Swiss, Italian).

Talking about her education, she is a graduate of the Royal Academy of Dramatic Art (RADA), London. She earned her graduation in 1995. Moreover, she was also a member of the Musical Youth Theatre Company which was founded by Greg Vere.

In 2004, she starred alongside Indian actress, Aishwarya Rai Bachchan in ‘Bride and Prejudice’. She portrayed the character of Ilsa Pucci in the second season of the TV series, Human Target. However, the show was canceled in May 2011.

Indira landed the role of Ellaria Sand in season 4 of the HBO blockbuster show, Game of Thrones. Her acting was well-received and she also featured in seasons 5, 6, and 7.

She starred in the eight-episode British TV drama ‘Paranoid’ in 2016.

Indira Verma has an estimated net worth of around $5 million. However, there is no information about her salary. An average British actress earns around $40k. However, Verma might be earning a 5 figure salary a year.

Other than that, she has not been involved in controversies.

Her hair color is black and her eyes are dark brown in color.

You may also like to read the Bio, Career, Body Measurements, Net Worth, Social Media, Relationships, and more of Emilia Clarke, Alice Evans, Scottie Thompson, and more.