Instasamka is a married girl. Her husband’s name is Oleg Eropkin. They are in a serious relationship and they are really close to each other. It has been six months since they are married. 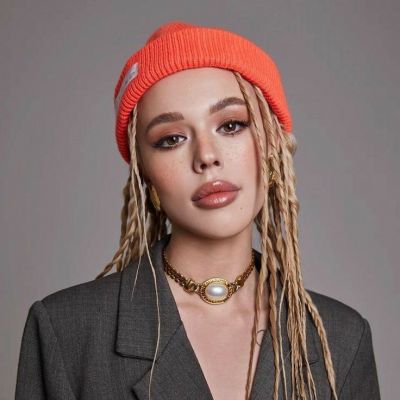 Instasamka is a famous rap artist pop singer and social media star. Her real name is Daria Evgenievna Zoteeva. As well as she is an Instagram blogger too.

She has released several singles. Her famous music is FAMILY BUSINESS and TRIPLE KID Recently she posted a Tiktok set to the Bazzi song Mine in March 2021.

Instasamka is 21 years old and born on May 11 2000 in Tobolsk, Tyumen Oblast, Russia. Her birth sign is Taurus. She moved to Moscow and she spent her childhood in Moscow.

About her parents, she has not revealed anything about her parents but her mom appeared in her latest Instagram post. Her younger sister’s name is Rita.

Talking about her education, Instasamka studied at the school of tobolsk. Later on, she was expelled in the ninth grade. Furthermore, she went to school and entered the local technical school again she joined Moscow state law University. Unfortunately, Due to her poor attendance, she was expelled.

Instasamka was very interested in acting and singing since her childhood. Slowly she started her creative career when she was in Moscow. In 2017 she began to post her shoot videos of the conversational genre and short funny videos on Instagram.

She is often compared to the rap artist Morgenstern, who also gained his fame on outrageous. Her best album of 2021 was Moneydealer.

Along with that she also ranked 22nd in the top 50 domestic albums of 2021. Additionally, Daria’s accounts on this social network are one of the most popular in Russia.

Instasamka has an estimated net worth of about approximately $1.1 million-$ 2 million. Talking about her annual salary is not unknown.

Let’s talk about Instasamka rumors and controversy Daria was rude to a Yandex Food courier and poured coffee over him for not following the coronavirus measures. Along with that she kicked the makeup artist out of her apartment and got nasty. Actually, she is rude in her behavior.

Instasamka is a beautiful girl with Dyed Blonde hair color. She has a pair of Brown eyes color.