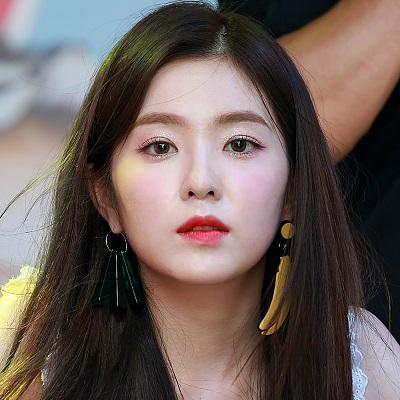 Irene’s current relationship status is single. Till the date, she has not shared any details of her previous relationships.

However, there were rumors that she was in dating her co-host, Park Bo Gum when they were hosting the Music Bank. During an interview, she revealed her feeling to Park.

Lately, in 2019, she was rumored to be dating the EXO’s leader, Suho. Lately, the rumored couple was featured doing the wedding theme photoshoot too that looked quite a real. Besides that on the 13th of April 2020, they were also spotted attending sub-unit of Super Junior, Donghae, and Eunhyuk’s (D&E) concert too.

However, they have not made anything officially yet.

Who is Irene (Bae Joo-Hyun)?

South Korean Irene is a K-pop singer and actress. She is renowned as the leader and vocalist of the South Korean girl group, Red Velvet.

Last, in 2020, she contributed a voice to the character, Baby Fun in  Trolls World Tour.

She is also the brand ambassador of beauty brand, Clinique.

Irene was born as Bae Joo-Hyun on the 29th of March 1991 in Daegu, South Korea. She is of far-east-Asian ethnicity. Her family name is Bae. The family own restaurant in Daegu.

She has a younger sister. Her sister also associated with their family restaurant.

She graduated from Haknam High School in Daegu.

On the 9th of December 2013, she debuted as the rookies of the entertainment company. Later, she also featured in the music video, 1-4-3 of Henry Lau.

On the 1st of August 2014, she debuted as the leader of the girl group, Red Velvet with the music on the music program, Music Bank.

Later on the 4th of August, along with the group, she released the debut digital singles, Happiness. Within 24 hours, the singles earned 2 million views on YouTube. As of now, the group has released 11 extended plays along with two studio albums, The Red and The Velvet.

Apart from the lady group, she has also earned a reputation as a solo artist. In 2015, she appeared as the host of the Music Bank. Through the program, she gripped the attention of her hosting and singing skills.

In 2016, she featured the TV series, Descendants of the Sun in the cameo roles. The same year, she appeared in the lead role of Ah-Reum in the TV series, Women at a Game Company.

Besides acting and singing, she endorsed many brands as a model that includes contact lens brand Cooper Vision, Eider, HiteJinro Chamisul Soju brand.

Later, in February 2019, she became the first Asian model to represent the Italian jewelry brand, Damiani.

She has an estimated net worth of $1.3 million. She has managed o make such a hasty net worth through her career as a singer and music videos. Besides that, she also earns through her TV and movie appearances too.

Apart from that, she also makes through her career as a voice artist. Also, she earns by endorsements of the popular brands including beauty brand, Clinique & Italian luxury jewelry brand Damiani.

In March 2018, she made headlines in the media. She disclosed that she was reading a feminist book, Kim Ji Young, Born 1982. At the time, she was also addressing the patriarchal South Korean society.

Due to that, she faced backlashed by her male fans. However, she stood high and ignored the controversy.

With the fair complexation, Irene has brown eyes with black hair. She stands at a height of 5 feet 2 inches and weighs around 48 kg.

You may read the bio, age, education, career, net worth, salary, controversy, and rumors of Jennie Kim, Zion, and Alex Gaskarth.