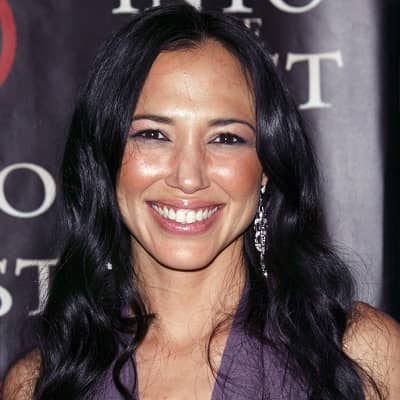 Irene Bedard is now single after her divorce.

Previously she was married to a singer, Deni Wilson. The couple tied the knot in 1993. They also have a son, Quinn Wilson born in 2003.

Irene revealed in 2010 that Deni has sexually and physically abused her and they result in their separation. The duo divorced in 2012.

Who is Irene Bedard?

Irene Bedard is an American actress, voiceover artist, and producer. She has worked in various movies and series.

Moreover, in 1995, she was included in the “50 Most Beautiful People” list curated by People magazine.

Irene was born on July 22, 1967. She was born and raised in Anchorage, Alaska, United States.

Her father’s name is Bruce Bedard and likely her mother’s name is Carol Bedard. She is the oldest sister of her four siblings: Leslie Bedard, Jospeh Bedard, and David Bedard.

Her nationality is American whereas she has Mixed (Inuit and French-Canadian ) descent.

Bedard completed her schooling at Dimond High School. Then she got enrolled at the University of the Arts, Pennsylvania, and studied Musical Theatre.

Irene started her acting career in the year 1994. She debuted as Nakooma in the theatrical film Squanto: A Warrior’s Tale. No sooner she got the chance to portray Mary Crow Dog in the television series Lakota Woman: Siege at Wounded Knee. After it, the actress received various works and which aids her popularity.

The following year, she starred in the movie Pocahontas and the television series The Marshal.  Additionally, the actress also provided vocals to the character of Pocahontas in the video game, titled Animated Storybook: Pocahontas, in 1995. She has then appeared in different movies like Navajo Blues, Smoke Signals, Paris, Wildflowers, 12 Bucks, Pussykat, Love’s Long Journey, and many others.

Likewise, she has starred in various television series and programs too. She is well known for her series: Squanto: A Warrior’s Tale. Irene is also popular serving as the physical model for the Pocahontas character in Disney films.

Apart from movies, she is also an activist and served on the American Indian Enterprise and Business Council to the United Nations.

Irene is active in the entertainment industry for two decades and has amassed a net worth of $5 million. Similarly, she earns an annual salary of $500 thousand.

In Nov 2010 Irene revealed that she was being sexually and physically abused by her husband, Denny Wilson throughout their marriage.

He even restricted her from doing projects unless he approved of them which was disclosed by her niece, Alia Davis.

Furthermore, she has black colored hair with dark brown eyes.

Similarly, she joined Twitter in Dec 2011 and has more than 715 followers now.