2-time Olympic medalist, Irina Slutskaya is married and a mother of three.

Irina Slutskaya is a married woman.

She married her boyfriend, Aleksey Govyrin on June 23, 2018. Irina and Aleksey have a daughter, Kira born in October 2019.

Previously, she was married to Sergei Mikheev, in August 1999.

They met each other three years earlier at a summer camp near Moscow, where Mikheev was a physical education instructor.

Irina and Sergei have two children: a son, Artem, in November 2007 in Moscow. Furthermore, in October 2010, she gave birth to their second child, a daughter named Varvara.

However, the couple divorced in 2016 after 25 years of married affair. 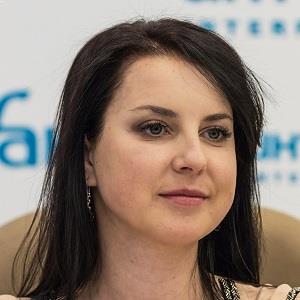 That's life again. We can't decide what we like

You never know what can happen

I'm happy because I got another medal. It's a competition and it's ice and anything can happen.

Who is Irina Slutskaya?

Irina was born in Moscow, Russia on February 9, 1979, as Irina Eduardovna Slutskaya, the only child of a Russian mother and Jewish father. She is 42 years old. Her mother was a former cross-country skier for the Soviet Union.

She became interested in skating in her childhood years and began skating at the age of four. She is of Russian nationality. Furthermore, she belongs to Jewish-Russian ethnic background.

Talking about her education, Irina graduated from the Moscow Academy of physical culture in 2000.

Irina initially made her mark as a promising junior skater by winning the bronze medal at the 1994 World Junior Championships, held in December 1993 in Colorado Springs.

Additionally, in the 1994–95 season, she continued her rise; after winning the 1995 World Junior title in November 1994 in Budapest, she took bronze at the 1995 Russian Championships to qualify for her first senior ISU Championship.

At the 1995 European Championships, she came back from a fall in the short program to skate the third-best free skating and rose to fifth overall.

In figure skating at the 2002 Winter Olympics, Irina won the silver medal for her country and became the second Russian ever to win a medal in the women’s event.

Irina has not revealed her current salary. Additionally, her net worth is estimated to be between $1 Million – $5 Million.

Irina became part of controversy during the winter Olympics after she duly beat Michelle Kwan but she was pipped to gold by Sarah Hughes. Additionally, the Italian judge’s decision to place her fourth was controversial. At present, there are no rumors concerning her life and career.