Posted by MarriedBiography Posted on July 20, 2021 | In Dating , Relationship
Share this 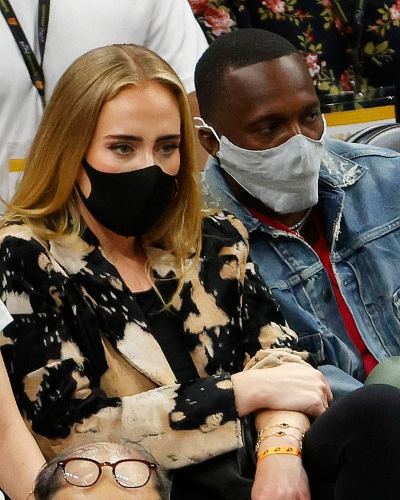 Adele was a head-turner at Game 5 of the NBA Finals. She stole the show and sparked dating rumors by sitting next to NBA agent Rich Paul at the game. She wore a chic velvet cow-print coat by Vivienne Westwood from the designer’s Autumn/Winter 2020/2021 collection.

But her rest of the look was simple with a black top and slim-cut black pants, accessorized with a glamorously sky-high pair of Gianvito Rossi’s Portofino 105 velvet sandals and Louis Vuitton’s monogram Empreinte bumbag ($1,990). Their dating rumors swirled when Adele and Paul sat together at the game where they pictured laughing, chatting, and watching the Milwaukee Bucks beat the Phoenix Sun 123-119.

ESPN’s Brian Windhorst referred to Adele as Paul’s ‘girlfriend’ during his post-game podcast. He said,

“Rich Paul, [LeBron James’] agent, brings his girlfriend to the game sitting next to LeBron. His girlfriend is Adele. Rich Paul is at the game with Adele. This is the first time they’ve come out in public together, so this will be all over the tabloids, especially in England tomorrow.”

She has also been linked with British rapper Skepta. She is single as of now and might be dating Rich and keeping it a secret.

Also read Are Adele and her ex-husband Simon Konecki neighbors? Adele is self-conscious after weight loss!

Adele is an English singer and songwriter. She is a Grammy Award-winning artist with hits like Rolling in the Deep, Someone Like You, and Hello. She released her debut album 19 in 2008.