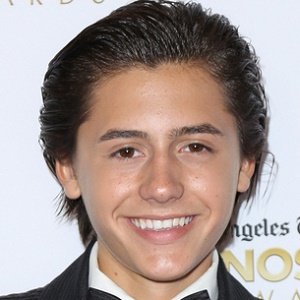 What is the relationship of Isaak Presley?

Isaak Presley is in a relationship. He is dating a girl named Kenzie Ziegler. She is often seen with him on his YouTube videos.

They also share photos on social media. Recently, they have shared a photo of them wearing masks due to Coronavirus on Instagram.

Who is Isaak Presley?

Isaak Presley is an American actor plus a singer. He is best known for Stuck in the Middle and Fuller House.

Besides acting, Isaak is an athlete plus a martial artist.

He was born on June 16, 2002, in the United States of America. There are no details about his father, mother, and siblings. His educational background is also unknown.

His nationality is American but his ethnicity is caucasian. During his childhood, Issak performed in several events in Southern California.

Isaak was seen as Ethan Diaz in the American comedy TV series, Stuck in the Middle in 2016. Since then, he plays the character, Ethan, in the series.

Besides acting, Issak is an accomplished Gymkhana athlete. He has won more than 20 gold medals as an athlete. He is also a professional martial artist. Issak is also a popular social media star and singer.

He became popular as a singer when he released a single called “Cowboys are Real Men” on his self-titled YouTube channel.

Rumors are that Issak is in a relationship with his mysterious girlfriend since 2016.

Moving towards his body measurements, Isaak Presley is 5 ft 8 inches tall and weighs 65 kg. His eyes are in dark brown color and his hair color is also dark brown.

Issak is very popular on social media. He has over 33.7k followers on Twitter and over 1.7 million followers on his Instagram.

He has over 13k followers on his official Facebook page. His self-titled YouTube channel has over 536k subscribers.