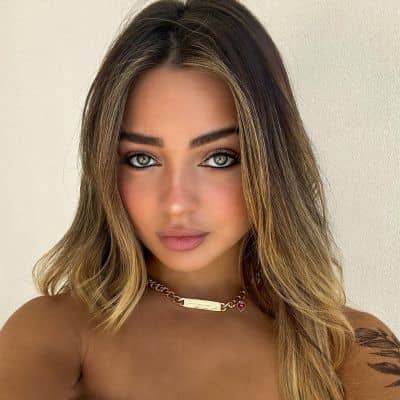 Is Isabella Durham Single Or Dating Someone?

The 19-year-old model, Isabella appears to be single at the moment. To this date, she has not introduced anybody as her boyfriend or lover.

Also, she has not shared details about her previous relationship and ex-boyfriends.

Who is Isabella Durham?

Isabella Durham is an emerging American actress, model, and Internet personality. As an actress, she is known for her roles in the movie and series, Running Mate, Wrath, Angels from Hell, Chicken Girls, and Falling Up.

Furthermore, she is also popularly known as the sister of Carrington Durham, who is an accomplished actress and model.

The young Instagram star was born on January 08, 2003, in Nashville, TN, United States. As of 2022, Isabella is 19 years old and holds American nationality.

Similarly, her ethnicity is Caucasian and according to the astrologers, her birth sign is Capricorn.

However, the actress has not shared data on her parents and early educational life.

Talking about her siblings, she has an older sister named, Carrington Durham, who is a renowned model and actress.

Isabella Durham is an American Actress and model, who came into the limelight after appearing in the movie Running Mate.

In 2013, she appeared in a minor role of a young child, in the short drama, Falling Up. It stars Dylan Shepherd as Charles Henry, Amanda Pajer as Ruth, Mike Pfaff as Robert, Alistair McKenzie as Doctor Mathis, and others with a recurring roles.

In addition, in the year 2016, she was cast in Justin Groetsch’s Wrath, starring her sister Carrington Durham, Sydney Morgan, and others.

The following year, she starred in the tv series, Angels From Hell, along with her sister, Carrington and Sawyer Sharbino.

In 2017, Durham portrayed the role of Sierra Raymond, in the 1st season of the web-series, Chicken Girls. As of 2022, it has already released the 10th season.

The series is a prequel to the web series, Chicken Girls: College Year. It is widely known for launching the careers of stars like Annie LeBlanc, Hayden Summerall, Brooke Elizabeth Butler, and Indiana Massara.

Apart from being an actress, Durham is also an Instagram and TikTok star. Her photos on Instagram and lip-sync and dancing videos on TikTok have been very popular.

As of 2022, the net worth of social media sensation Isabella is calculated to be around $500k. In addition, she has various sources of earnings as an actress, and model and has also signed with commercials and endorsements.

There is no record of Isabella being involved in any rumors and buzzes.

Owing to her social media career, she has not indulged in any part of controversy yet.

The Running Mate’s star Durham stands at the height of 5 feet 4 inches and weighs around 50 kg. Moreover, she has figure measurements of 33-23-30 Inches, which indicates her bust size is 33 inches, waist size is 23 inches and hips size is 30 inches.

Similarly, she has a fair skin tone, along with a pair of blue eyes and dark brown highlighted hair.

Furthermore, She owns a self-titled Youtube channel, which was created on August 26, 2013. As of 2022, her Youtube account has garnered around 4.33k subscribers and made only 12 uploads on it.

In addition, Durham is also available on TikTok, and it has been able to rack up about 470.6k followers already.