Updated On February 2, 2023 | Published By: Smriti Sharma
Share this
Divorce 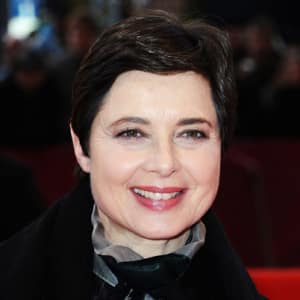 If you go to a therapist, they say, 'Are you sure? How do you feel about your wrinkles?' And I say, 'I don't know, because I don't really see them.' I see my hands, but I don't see my face, so it's not a torment

When I was hot as a model, I always knew my entire schedule for the next eight months in advance, every moment was planned and filled. And this lasted for 10 years!

What is the relationship of Isabella Rossellini?

She has a child name, Roberto Rossellini. Then, she got married to Jonathan Wiedemann in 1983 but the marriage didn’t go well so they got divorced in 1986. The couplets have a child name Elettra Rossellini Wiedemann.

Who is Isabella Rossellini?

Likewise, she is noted for her successful tenure as a Lancome model, and for her roles in films such as Blue Velvet (1986) and Death Becomes Her (1992).

How many siblings does Isabella Rossellini have?

Her birth sign is Gemini. Talking about her education, firstly, she attended Finch College. Then, she attended New York University.

Talking about her profession, she debuted in films in 1976 when she played a brief role as a nun opposite her mother in ‘A Matter of Time’.

In 1982, she also became the exclusive spokesmodel for the international cosmetics brand Lancome, a position which she held for 14 years.

In 1985, she also appeared in her first American film, ‘White Nights’, followed by her breakthrough role as the abused nightclub singer Dorothy Vallens in the film ‘Blue Velvet’, directed by David Lynch. Therefore, she also contributed her vocals to the film’s soundtrack.

She also appeared as herself in an episode of the TV series ‘Friends’ in 1996. Moreover, her performance in the 1996 HBO television film ‘Crime of the Century’.

Similarly, she narrated a two-hour television special for the ‘Discovery Atlas’ series on the Discovery Channel. Likewise, she also spoke about her past and current activities in an episode of ‘Iconoclasts’.

Therefore, she also created a short film as a tribute to her father called ‘My Dad is 100 Years Old’.

In 2007, she also made a short film on the environment called ‘The Green’ for the Sundance Channel.  Consequently, she wrote, directed, and acted in both series.

In 2014, she also portrayed the silent film actor Rudolph Valentino’s mother in the film ‘Silent Life’. In the same year, she appeared as Lola in ‘Zigzag Kid’, a Dutch-Belgian adventure film, directed by Vincent Bal. In 2016, she played Rita Marks in the series ‘Shut Eye’.

Talking about her lifetime achievements and awards, she won Saturn Award for Best Supporting Actress for Death Becomes Her (1992), and she won Special Mention Award for Left Luggage (1998).

Similarly, she won Golden Camera Awards for Best International Actress for Fearless (1993). Besides that, she won the Maverick Movie Award for Best Performance for Flat Love (2009).

How much is the net worth of Isabella Rossellini?

There is no information regarding her salary. But her net worth is around $50 million as of 2023.

There was a controversy that, Isabella Rossellini kicked off the 1990s by appearing in David Lynch’s film Wild at Heart. Currently, there is no such rumors or controversy related to her personal and professional life.

Talking about her body measurements, Isabella has a height of 5 feet 8 inches. Additionally, she weighs is unknown. Isabella’s hair color is black and her eye color is light brown.