Isac Elliot is a Finnish singer and songwriter. 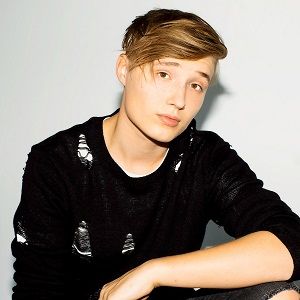 What is the relationship of Isac Elliot?

This teenage sensation and handsome singer is currently single. So far, there are not any records of his relationship and affair. Furthermore, he has never seen with anyone.

Additionally, Isac never spoke about his personal life in the public and media. It seems he is too young for being in a relationship and currently focused on his career rather than stuck in any relationship. As of now, this Finnish singer is single.

Who is Isac Elliot?

Isac Elliot is a Finnish singer and songwriter. He is popular for his song “New Way Home” and his debut album Wake Up World in 2013. Both of them became a huge hit in Finland and Norway.

Back in 2014, he landed another hit album Follow Me which was #1 on the Finnish Album Chart.

Isac was born on December 26, 2000, in Kauniainen, Finland. He is the son of the lead singer of the band The Capital Beat, Fredrik “Fredi” Lundén and Linda Hemming.

Isac began his career as a member of the boy choir Cantores Minores. Later, he was also featured in the Svenska Teatern musicals Cabaret and Kristina från Duvemåla.

On 14 February 2013, this Finnish singer launched his debut song, “New Way Home”. Furthermore, it also climbed to number one on the Official Finnish Singles Chart and number 14 in Norway.

Additionally, Isac launched his debut album, Wake Up World on 24 May 2013 which also ranked number one on the Finnish albums chart.

Besides this, he was also named in the future stars section of Billboard’s “Next Big Sound” list in 11th place. Moreover, a movie about his career named, Dream Big – The Movie was released on 14 February 2014.

On 7 November 2014, Isac released his second studio album Follow Me. Becoming a teenage sensation, he was named Elvis Duran’s Artist of the Month and also featured on NBC’S Today show.

Being a superhit singer, Isac earns a good amount of money from his profession. However, his current net worth and salary are unknown. So far, Isac has not won any awards.

Although, he has been doing his work in the best possible way. Furthermore, his songs have been also ranked at the top of the charts regularly.

What are the body measurements of Isac Elliot?

Young and handsome, Isac has a height of 6 ft 1 inch and his weight is unknown. Furthermore, he has brown hair and blonde hair.

Isac is pretty active on social media. He regularly keeps posting photos on his social accounts as well as videos on his YouTube channel, IsacElliotVEVO in which he has 139k subscribers.

Is Isac Elliot involved in any rumors and controversies?

So far, there are not any drastic rumors regarding his personal and professional life. Moreover, he has never been the topic of controversy to date.