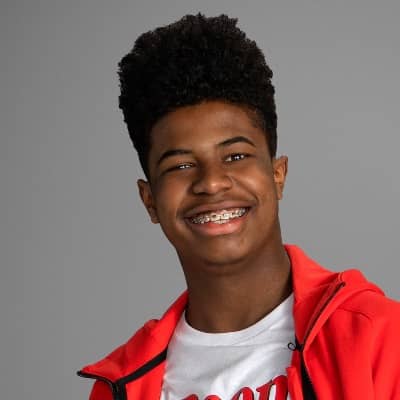 What is the relationship of Isaiah Crews?

Isaiah Crews is currently assumed to be single. There are no past or present relationship rumors, gossip, or any kind of linkup of him yet. He wants to keep his personal life private and uptight. If any girl he will meet in the near future, hope he will open up and we have something to buzz about.

He loves playing a video game, Beat Saber during his spare time. Likewise, his favorite musician is Lizzo, and is a huge fan of anime.

Who is Isaiah Crews?

Isaiah Crews is an American actor mostly popular as the son of Terry Crews, an actor, television host, and former American football linebacker. He is noticed for appearing in the BET reality TV series, The Family Crews alongside his family.

Isaiah Crews was born on June 27, 2005, in Flint, Michigan, United States of America. His full name is Isaiah Samuel Crews.

His parents are Terry Crews and Rebecca Crews. Isaiah’s father Terry is an actor, television host, and former American football linebacker. While his mother Rebecca is a Gospel Singer and Former Beauty Queen. His parents have always been supportive of him and his confidence builders.

He grew up with his elder sisters namely Azriel, Terra, and Wynfreysicomedy. His father’s film White Chicks gave him the motivation to follow in his footsteps.

He is of mixed ethnicity of Afro American. Furthermore, he holds an American nationality and his birth sign is Cancer.

There are no details on his education.

Isaiah started his acting career in the TV series Side Hustle as Munchy. After that, he appeared in many TV shows including ‘Entertainment Tonight’,‘Orange Carpet Special Edition ’, and ‘Nickelodeon Kids’ Choice Awards 2022’.

However, he got attention for appearing in the BET reality TV series, The Family Crews alongside his family from 2010-2011. Later, he appeared in Hollywood First Look Features and Access Hollywood which adds more limelight among the people as well.

Crews have not yet won any awards or nominations yet. However, he has appeared at the 2018 Gamers’ Choice Awards and lighted up several red carpets.

For his recurring role on the Nickelodeon series, Side Hustle, he has earned around $15k per episode in the first season. However, he has not divulged his net worth and asset value.

His parents have made sure that he lives his life without the involvement of the paparazzi. Therefore, he has been able to maintain a clean profile.

Crews stand 5 feet and 10 inches tall and weigh around 75 kg. His both hair and eyes are black in color. He is a young man with a cheerful smile on his face.

Talking about his fan following on social media, he has a huge number of followers. He has over 800 followers on Twitter and around 51.1k followers on Instagram.

Rebecca King Crews is Married to Terry Crews and made a pact of 90 Days with out SEX!! Know about Terry’s addiction to Pornography!! The Couples Personal Life