Talking about her personal life, Isla Fisher is a married woman. She is married to famous comedian Sacha Baron Cohen. She first met Cohen in 2002 at a party in Sydney, Australia. The couple became engaged in 2004. The couple got married on 15 March 2010.

They together have three children named Olive Baron Cohen, Elula Lottie Miriam Cohen, and Montgomery Moses Brian Baron Cohen. Sacha and Fisher have been married for seven years now and their relationship is going very well.

Before marrying Cohen, she dated Australian actor Shane Ammann in the mid-1990s. She also dated English actor Darren Day from 1998 to 2000. 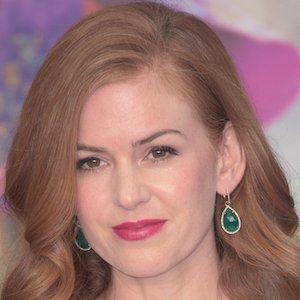 Am I a romantic at heart? Who knows.

I always liked Elvis Presley when I was younger - I told anyone who would listen that I was going to marry that man. I didn't realize then that he had died.

All I know is that I've ruled out wearing fairy wings. When I was nine I wanted to get married in fairy wings, and now I realize that's not cool anymore.

Who is Isla Fisher?

Isla Fisher is a famous actress from Australia. Isla Fisher is famous for playing the characters Gloria Cleary in the movie Wedding Crashers (2005), and Heather in I Heart Huckabees (2004). Her role in the movie Wedding Crashers was highly appreciated by the audience. As a result, she won the MTV Movie Awards for Best Breakthrough Performance in 2006. In the meantime, she was nominated for the Teen Choice Awards for Choice Breakout (Female). Fisher is the wife of famous British actor and comedian Sacha Baron Cohen.

Fisher was born on 3 February 1976, in Muscat, Oman. Her parents are Elspeth Reid and Brian Fisher. Fisher’s father worked as a banker in Oman for the United Nations at that time. When she was a child, Fisher and her family moved back to their hometown of Bathgate, Scotland. After that, she moved to Australia when she was six years old. She has four siblings. Her nationality is Australian and she is of Scottish ethnicity. Fisher attended Swanbourne Primary School. After that, she enrolled at Methodist Ladies’ College. Afterward, she attended L’École Internationale de Théâtre Jacques Lecoq in Paris when she was 21 years old.

Fisher began appearing in commercials on Australian television at the age of 9. After that, she won roles in popular children’s television shows Bay City and Paradise Beach. When she was 18, she published two novels Bewitched and Seduced by Fame. Afterward, she played the role of Shannon Reed on the Australian soap opera Home and Away from 1994 to 1997. As a result of her good acting, she received a Logie Award nomination for Most Popular Actress for her role. In 2001, Fisher appeared as Kim in the German horror film, Swimming Pool. In 2002, she had a role in the film version of Scooby-Doo as Mary Jane.

Rumors are that Fisher is set to be back in the film Now You See Me 3. It is also rumored that she is currently having a bad time with her husband and they are about to separate.